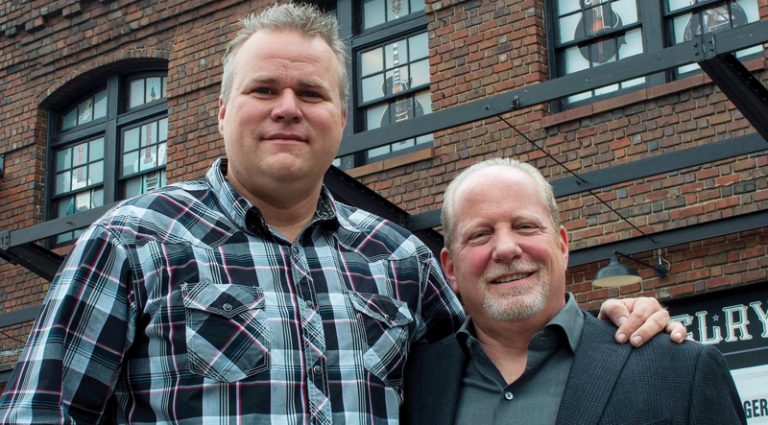 Ask anyone who geeks out on vintage guitars, from the well-heeled collector to the dreamer whose prized possession is a relic’d reissue, and you’ll hear the stories… First sighting of a real ’Burst. That trip to the famous shop to get that photo beside the ’59 Flying V. Knowing someone who knows a guy who got to check out Jimmy Bryant’s ’54 Strat or Don Rich’s gold-sparkle Tele. Or, sure, you’ve seen an original Firebird… couple of ’em, maybe.

Now imagine 7,500 square feet filled with all the above and much more. More than 30 Les Paul Standards from the ’50s. Lloyd Loar pieces in mint condition. Ten ’54 Strats. Flat-tops and jazz boxes from the great eras. The wildest historic offerings from Gretsch and others, along with prototypes and one-offs, ultra-rare banjos, and period-correct accessories and memorabilia. This fantasy land exists in the form of Songbirds Guitar Museum.

Located on the southern edge of a booming downtown Chattanooga, Tennessee, Songbirds occupies the rennovated, historic Chattanooga Choo Choo train station. The museum draws from a collection of roughly 1,800 pieces; 531 instruments make up the opening layout. Many of the general admission and Vault displays are intended to be essentially permanent, with the occasional exchange or addition of individual pieces. Curators plan to change the Green Room displays at intervals of four to five months.

Songbirds is the brainchild of a small group headed by Curator and CEO David Davidson, founder of We Buy Guitars, along with Johnny Smith, a local entrepreneur and drummer who serves as President of the organization. Davidson built his collection during decades in the vintage retail business, along the way developing a network of customer/collectors who were engaged as contributors.

“There are people I’ve known and dealt with for decades, and they’ve acquired these great pieces, and loved them all this time,” he said. “None of us is getting any younger, and many of the instruments are really valuable. But, there’s something more important; I tell collectors, ‘When you’re gone, these wonderful pieces of history could end up being sold to someone you don’t know, someone who may not appreciate them for what they really are.’

“These guitars represent a different time. Without question, there are still great guitars being made by major manufacturers, but there’s something different about guitars from previous eras, and a lot of it has to do with how people approached their work back then, how they thought about it. Dollar-value aside, you pick up most vintage pieces and you can just tell there’s a whole different thing put into them. These things need to be saved – and seen. In a curated context, grouped and presented in specific ways, they tell a story. You get a sense of that other America. Whenever you look at a great, valuable guitar, you think, ‘Wow, that’s a cool ’62 Strat!’ But, look at a wall of Strats made from ’60 to ’65 and it’s a whole different deal – a bigger picture.

Beyond the tangible elements of the guitar, Davidson points to how it abetted the evolution of popular music.

“It changed everything,” he said. “There were horn bands, big bands, orchestras – that was pop music. Then along comes the electric guitar, and bang! Whole different kind of society. You walk through this place and a sense of that jumps out at you. All the goodies are there, the case candy and accessories, and photos, sounds, video… When you get to, say, the British Invasion exhibit, you see and hear and feel the instruments and people who created all that out of thin air. We put this together so you’re surrounded with all of it.”

As the museum shifted from dream to bricks and mortar, the team’s initial challenge was simply to find space to house the collection as imagined. Much of the heavy lifting fell to Smith.

“I’m a drummer by trade, but I just love guitars, and I love the sense of Americana that vintage instruments give us,” he said. “I’m also a pretty big Chattanooga booster, and it’s a great location between the music centers of Nashville and Atlanta. Plus, it has its own history that’s interesting and important.

“We caught a break with the train station, which is a truly historic location,” he said. “There were a lot of ideas floated and several ways to re-purpose it, especially since our downtown renaissance several years ago. But the timing was right, and it has worked out to be a perfect fit.”

Great care was taken in designing not only the museum’s layout, but the presentation of different styles, eras, manufacturers, and musical trends. The permanent collection includes an exhibit devoted to pre-war Martins (exploring construction techniques and featuring a 1941 D-45), a presentation on Leo Fender and his company’s evolution (including a complete collection of custom-color Stratocasters, Telecasters, Esquires, Jazzmasters, and Jaguars, along with the ’54 Strat Leo made for George Fullerton), a group of custom-color Gibsons that sports one of the most complete sets of Firebirds anywhere, and a golden-era Gretsch collection, hollow and solid, highlighted by a Sparkle Jet group anchored by a ’62 in Champagne. Some areas of the museum are devoted to rotating exhibits, like the initial Surf Music, British Invasion, and special Bluegrass presentations. And then there are the ’Bursts forming a veritable time line of vintage guitar’s Holy Grail.

“It’s become cliché to call something ‘an experience,’” said Smith. “But every exhibit you walk into here really is. You see the instruments, the accessories, and related items from the period, you start reading about all of it, you see videos and animation on the LED screens, and you hear the music invented on these pieces. In some sections, you’re actually surrounded by those elements. We also have concerts – Dick Dale was first – and we’ll have bands playing music from a particular period at one exhibit or another, using correct instruments for that exhibit. And, there’s an educational component. It’s amazing how guitars draw young people – those born long after it made its mark. It fascinates them, and gives them a completely different perspective. It helps them understand the development behind the music of their generation.”

Before opening, the museum enlisted country star/superpicker (and vintage junkie) Vince Gill as its ambassador. Davidson and Smith traveled to Nashville to discuss the association, and they took serious bait.

“We put guitars in his hands that really twisted him up,” Davidson recalls. “When I handed him the Don Rich Tele, he got misty-eyed. We’re thrilled to have him onboard. The guy is the whole package – so talented, and he has an amazing collection. Plus, he’s just such a gentleman.”

Gill sees the same threads of Americana woven into the Songbirds fabric.

“First off, you really can’t imagine the size and scope of this thing until you actually see it. It’s just ridiculous, like the world’s biggest candy store for guitar geeks. But they’re presented in a way that’s really informative, and David’s right – it gives you a sense of a time where people maybe looked at what they did for a living in a different way.

“I’m sure a lot of people will find at least one guitar that means something special to them; Don Rich’s gold-sparkle Tele is that way for me. Seeing that thing on TV when I was a kid is something I’ll never forget.

“I was honored when they asked if I wanted to be associated with the museum,” Gill added. “They did this right, and they went big. I don’t think there’s anything even close to it anywhere.”

Gill curated a special exhibit of pieces that are personal touchstones for him. He made the two-hour drive for the grand opening in mid March with Nashville repair guru Joe Glaser, who sees the collection’s historical value in technical terms.

“I’ve seen a lot of vintage guitars,” he said. “Not as many as George Gruhn or Walter Carter, but a lot. But seeing them here provoked a lot of new thoughts for me – the sheer number of pieces, the kinds of instruments, the way they were collected, and how they’re presented. There’s a good number of instruments built for trade shows or as custom pieces, and having an aggregate shows what those companies could do. They took different paths you can’t even imagine until you see it all together. One example is a ’57 Fender P Bass – blue sparkle over a contrasting blue metallic over gray primer. Now, it’s common knowledge that in the ’60s, Fender occasionally sent things to car shops for custom colors, and I thought those were the only instruments painted over gray primer. Years ago, I bought a ’57 P-Bass that had some sort of orange-gold sparkle over green-gold metallic over gray primer – very James Brown. I always assumed it was a refin, but suddenly, here’s a sister bass painted in the same manner. Now, I’m thinking the ’57 may have its factory finish after all. You see just one of those in 40 years, it raises questions. You see more than one, and you may be on the way to an answer. If Fender did it, how many did they do that way? Are there 50? Are there 12?

“There’s another group from the museum that comes to mind. In ’68 or ’69, Fender took a Banana-yellow Thinline Tele to a London trade show with 12 other one-off-finish Thinlines. One guy bought the whole lot, and now it’s in the museum. You see one of those, and you think, ‘Wow… a yellow Thinline Tele, some custom order. But you see 13 of them, and it gives insight.

“So, I see Songbirds as a resource. You can find answers – or raise questions – with an academic approach. The way it’s presented could be a great benefit to the knowledge base for vintage instruments.”

While celebrity ownership is not the museum’s focus, the collection does include guitars played by Roy Orbison, Chuck Berry, B.B. King, Buddy Holly, and Al Caiola, among others. The design includes a Green Room, where private tours and other functions can be held, and The Vault, which houses some of the rarest and most valuable instruments. Songbirds will schedule events and presentations; among the first is “Les Paul, From Start To Finish,” which includes several of the guitar wizard’s early inventions and lectures about his life by close associates.

“The collection is big enough and varied enough that we can arrange it in almost unlimited ways,” said Smith. “The displays are actually built with that in mind, and I don’t think we’ll run out of interesting ways to present things or different areas of focus. It’s exciting to think about all we can do on the educational front – part of the mission is to increase awareness of this part of American history.”

Davidson also touts the versatility of the space.

“We can rotate things in and out, like in the Green Room. Right now we have an exhibit called “The World Of Color.” It’s the most insane assortment of custom-color Fender and Gibson guitars you can imagine. The situation is just really satisfying. Folks from Gibson came down and brought Joe Bonamassa. He stood there for a minute with his mouth open, seeing things he never knew existed. And now he knows why he hasn’t been able to buy a custom-color Firebird – they’re all here!”

Information on tours, tickets, exhibits, and more is available at songbirdsguitars.com.