When you realize that Thompson’s 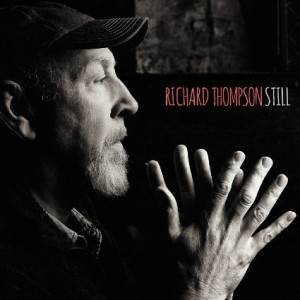 I Want To See The Bright Lights Tonight (with then-wife Linda and classics like “Calvary Cross”) was 40 years ago, you have to wonder if he’ll ever slump. Ironically best known as a songwriter, his guitar-playing fans know he’s one of the very best – on electric or acoustic, with virtually no overlap between the two.

Producer Jeff Tweedy of Wilco fame does a fine job of focusing on the vivid imagery of Thompson’s songs while giving him plenty of space to display guitar playing that’s as deft and original as his writing.

Though he’s perhaps the only artist whose audience occasionally requests “something depressing,” Thompson’s wry sense of humor is never far away. “Guitar Heroes” is in the tradition of Al Casey’s “Surfin’ Hootenanny” (how’s that for an obscure reference?). Its protagonist is at risk of being expelled and losing his girlfriend, because he has to practice so he can play like his heroes. Hence, Thompson shifts to snatches of Django Reinhardt, Les Paul, Chuck Berry, James Burton, and the Shadows. It’s not up to the level of Phil Baugh’s “Country Guitar,” but it’s more about the story than pyrotechnics. And like Baugh, the payoff is when Thompson finishes by playing like himself – full of angular turns and double-stop bends.