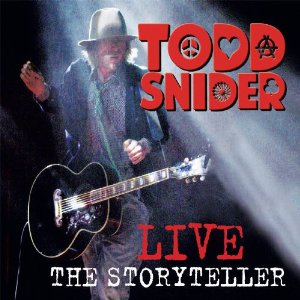 Todd Snider’s new two-disc set is as much about his stage presence as it is about his songs and stories.

Snider can be funny, poignant, and sad all in the same song, as he proves on “Greencastle Blues.” He also shines on “The Ballad of the Kingsmen,” where he defends rock and roll, and “America’s Favorite Pastime,” which talks about former Pittsburgh Pirates pitcher Doc Ellis throwing a no-hitter while tripping on acid.

The real fun, though, happens on cuts like a remake of the Rusty Wier song “Don’t It Make You Wanna Dance,” where Snider spins a yarn about how he came to be a singer.

A cautionary note; Snider makes ample use of salty language. He also references drugs many times, which doesn’t always translate well to record. But that’s Snider – the guy with the hippy attitude traveling in a van, singing folks songs.