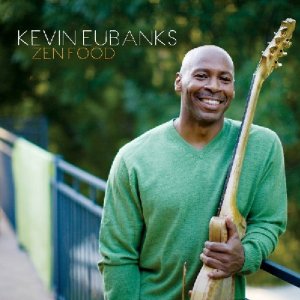 While most folks know of Kevin Eubanks from his 18- year gig as bandleader on the “The Tonight Show with Jay Leno,” he also has enjoyed a long career as a jazz guitarist. With Zen Food, his first release since leaving Leno’s employ, Eubanks makes a bid for mention among today’s jazz-guitar leaders.

Zen Food is highlighted by the interplay between musicians; Eubanks and Bill Pierce (on sax) double many melodies and challenging passages leading to solos. Drummer Marvin “Smitty” Smith and bassist Rene Camacho keep the songs moving and add an element of surprise. And pianist Gerry Etkins supplies perfect bedding for the soloists, and contributes his own solos. The tunes – all but one written by Eubanks – are full of memorable melodies that surprise in the right places. Whether an acoustic ballad like “The Dirty Monk,” with its great dynamics and simmering funk, or a bopper like “Los Angeles,” the twists and turns are memorable. On the latter, solos by
Eubanks and Pierce take the song to new heights; Eubanks starts with octaves, then breaks into single lines that feed the band with every note. On the Etkins tune “G.G.” Eubanks’ sinewy solo relies on volume swells and dynamics that show his feel and touch.

Eubanks’ soloing style is somewhat unique, with elements shared by most jazz guitarists, he on occasion delves into chords and octaves –
but never overdoes it. He also makes heavy use of chromaticism in areas of songs where a lot of guitarists might just re-play an earlier passage. And like his compositions, his playing not only stays fresh, but stays with you.