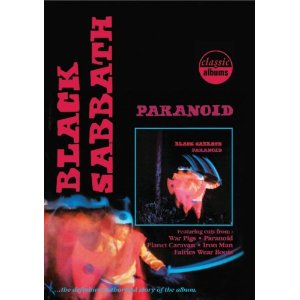 Released in the fall of 1970, Black Sabbath’s Paranoid was the shot heard ’round the world. As Sabbath bassist Geezer Butler ref lects, it’s been 40 years since the LP’s release, and metal is still an enormously popular rock genre, partially thanks to this epic album.

Every member of the original Sabbath is interviewed in this video, along with engineer Tom Allom (Sabbath, Judas Priest), alt-rocker Henry Rollins, and a variety of journalists. Once the interviewees start dissecting the album, it’s hard to resist the charisma and power of Paranoid. From Tony Iommi’s skull-crushing guitar riffs on “War Pigs,” “Iron Man,” and the title cut, to Geezer’s dark lyrics about the Vietnam war, depression, and creepy sci-fi monsters, the picture of metal mastery depicted here is simply staggering. In a few sections, the album’s heavier tracks are laid against grim combat footage from Vietnam, which is devastatingly effective. Then, in a heartbeat, we switch to the brooding ballad “Planet Caravan,” featuring melodic, jazz-tinged guitar solos inspired by, surprisingly enough, Django Reinhardt. Indeed, there’s more to Black Sabbath than meets the eye.

Perks include ’70s footage of Sabbath in concert, as well as newer scenes of engineer Allom pulling up individual tracks from the album on a studio mixer, allowing us to hear each instrument or vocal just as they were recorded four decades ago. Even more riveting is the fact that this metal masterpiece was recorded in just five days. And you have to appreciate the fact that the four members of Sabbath – Iommi, Butler, frontman Ozzy Osbourne and drummer Bill Ward – are all very respectful of each other and speak in a very honest, heartfelt manner about this famed album. While the argument about who invented metal won’t get solved in this DVD – was it Led Zeppelin, Deep Purple, or Sabbath? – the 97-minute documentary makes a good case for Paranoid at least being the greatest heavy metal album of all time.

Tom Petty and the Heartbreakers – Damn the Torpedoes