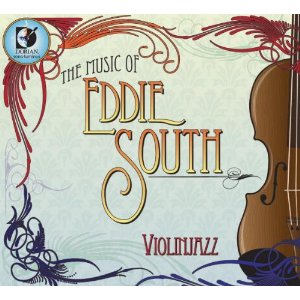 African-American jazzman Eddie South was known as the Dark Angel of the Violin. His moody compositions and hot solos were influenced strongly by Eastern European Gypsies, with whom he studied. And it was thus little surprise that Django Reinhardt sought him out to play together before joining forces with Stéphane Grappelli.

The group Violinjazz seeks to revive South’s stature among the great jazz violinists – including the likes of Grappelli, Joe Venuti, Stuff Smith, Ray Nance, Svend Asmussen, and others. The acoustic quartet is led by violinist Jeremy Cohen with pianist and arranger Larry Dunlop, bassist Jim Kerwin on loan from the David Grisman Quartet, and guitarist Dix Bruce.

From the first notes, the swing is infectious; South’s Romany influences shine on songs such as “The Black Gypsy,” “Tzigane in Rhythm,” and “Zigeuner.” But he also played blues and swing with soulful abandon on “Eddie’s Blues” and “Rose Room.” Violinjazz breathes new life into the music, re-creating South’s famous tunes but adding their own signatures as well in their flowing improvisations.