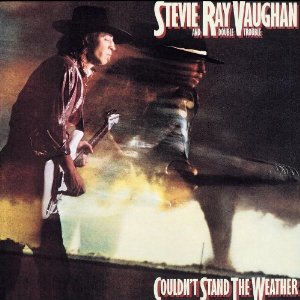 It’s hard to understate how important Stevie Ray Vaughan was to the guitar. He emerged when the guitar had all but ceased to exist on pop/rock radio. Even hitmakers who played guitar, i.e. Bruce Springsteen, didn’t feature it. So “SRV” was a blast of fresh air.

The Legacy Edition of Vaughan’s second album, Couldn’t Stand the Weather, features the original record with all the great cuts, like the impossibly funky title cut, the slow blues of “The Things I Used To Do” and “Tin Pan Alley,” “Cold Shot,” and “Scuttle Buttin’.” It also features “Stang’s Swang,” a jazzy tune of the sort that separated Vaughan from other “blues” guitarists. We also get 11 bonus tracks, eight of which were released on the expanded/ remaster from 1999. Three, including an incendiary “The Sky is Crying” have never been released.

Disc two is a concert from Montreal in August of 1984. It shows a guitarist and a band at the top of their game, playing confidently off each other. Vaughan’s control of his instrument is simply amazing; he’s versatile, has all the chops, and his band – Tommy Shannon on bass and Chris Layton on drums – are right there with him. The liner notes essay is written by Andy Aledort, and it’s informative and interesting.

There’s nothing surprising here, but this edition is a great reminder how a guitar can energize a lethargic pop world.