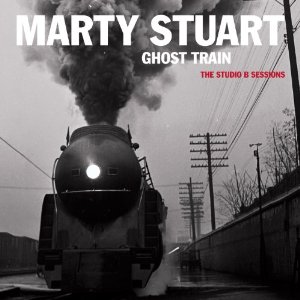 Marty Stuart is a musician, cultural historian, collector, photographer, and prodigal son-in-law. All these facets come together on his new album, Ghost Train, a pretty darned brilliant piece of work.

For those unfamiliar, Stuart’s curriculum vitae reads like the history of Americana music. His first regular pro gig, at the ripe old age 13, was playing mandolin and guitar with Lester Flatt. He stayed with Flatt until 1979, when Flatt passed away. Stuart then joined legendary fiddler Vassar Clements, playing on sessions with Doc and Merle Watson, Bob Dylan, Willie Nelson, Neil Young, and Billie Joel. In 1980, Stuart met Johnny Cash, who invited him to join his band. After six years playing guitar with Cash, Stuart signed a solo recording contract with CBS that yielded only one album, Marty Stuart, in 1986. In ’89, Stuart released an album on MCA, the first of four for the label. He also developed his “Marty party” hillbilly rock brand of commercial country that drew heavily from honkytonk and roots music. Since 2000, Stuart has released albums on his own label, Superlatone.

For Stuart, Ghost Train is a return to his roots. Recorded in RCA’s Studio B, it was the site of the first recording session in which he participated, and in the ’50s and ’60s it was used to record all of the label’s A-list pop acts, including Elvis, Homer and Jethro, often under the supervision of RCA’s principal A&R man, Chet Atkins. The album opens with “Branded,” a Stuart original that encapsulates what makes his music special – addictive melodies, hooky lyrics, and of course, hot picking. Joined by his regular band, the Superlatives, which includes Kenny Vaughn on guitar, Harry Stinson on drums, and Paul Martin on bass, Stuart romps through 11 originals supplemented by three covers. His rendition of “Crazy Arms” features steel guitarist Ralph Mooney sharing solos with Stuart and Vaughn, turning it into a twangfest.