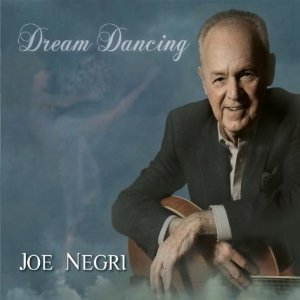 A regional star, local TV luminary and jazz virtuoso even before beginning his 32-year tenure as Mister Rogers’ favorite handyman, Joe Negri (see feature in the September ’10 issue) was woefully under-recorded until making three albums a few years ago.

Despite leading trios for nearly 65 years, he never recorded in that setting until now. Dream Dancing reveals him solidly within the bebop style he first embraced during his Army days in the mid ’40s. With solid support from his trio, drummer Tom Wendt and bassist Brian Stahurski, he plays with a zest and flair that belies his 83 years.

In characteristic bop form, he uses pop standards as a launch pad, showcasing his rich, pianistic approach to the guitar. He alternates sinuous single-string lines with chord melodies on “I Never Knew,” Cole Porter’s “Dream Dancing” and the ballad “You’ve Changed” ride atop buoyant Brazilian rhythms. “The Girl Next Door,” usually performed as a ballad, becomes an uptempo, playful vehicle for Negri’s fluid technique. “Darn That Dream,” by contrast, becomes an expressive ballad. “LaVerne Walk,” written by bassist Oscar Pettiford long ago, is a sleeper where Negri builds on the theme to make it a wide-ranging bop exploration, one allowing Stahurski room to stretch as well. The sole Negri original, “You Are All,” in true bop form, is an improvisation on the harmonic structure of “All the Things You Are.”

While his medley of four tunes by Johnny Mandel is straightforward, at the end he spends nearly seven minutes exploring Thelonious Monk’s venerable standard “After Midnight.” That may seem an unusual closing track, yet Negri’s hypnotic focus provides a smart contrast to the various upbeat tunes. Mark Yacovone’s crisp, lean production leaves nothing hanging. It allows Negri to stretch and if anything, demonstrate a vitality and with that, amply justifies similar albums in this vein.