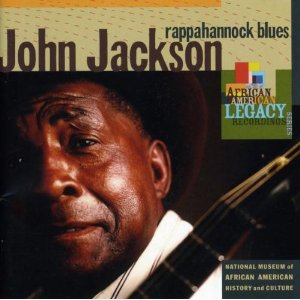 Piedmont (or East Coast) blues guitarists like Brownie McGhee, Rev. Gary Davis, Blind Blake, and Mississippi John Hurt had a tremendous influence on the likes of Jorma Kaukonen, Mark Knopfler, Leo Kottke and more recently, Samuel James, and Jack White. Sometimes dismissed as not being true blues, Piedmont was a lively, danceable, very popular pre-electric music. Traces found their way into rockabilly and some types of country music, but it didn’t grow in popularity like other blues styles. Piedmont’s precise ragtime-based rhythms and intricate fingerpicking weren’t immediately accessible to players who found that string bending and other emotionally dynamic techniques common to other styles could sometimes substitute for virtuosity.

John Jackson was a fabulous musician who returned to playing in the mid ’60s, after a 20-year break. Hearing the intricate runs, chord patterns, and timing he employs on this album, it’s hard to believe he took time off for anything but eating and sleeping. Johnson played in standard tuning and his technique is as flawless in a rendering of “John Henry” from 1997, when he was in his early 70s, as it’s in “Don’t You Want To Go Up There” recorded almost 30 years earlier. Jackson’s version of that song is likely based on the Carter Family’s recording of it, “There’ll be Joy, Joy, Joy.” Like his reading of Blind Blake’s “Too Tight Rag,” which echoes Bo Carter and even Robert Johnson, the Carter tune is a reminder that it’s dangerous to be too strict about categories – that could lead to missing great music.

Ralph Heibutzki – Unfinished Business: The Life and Times of Danny...