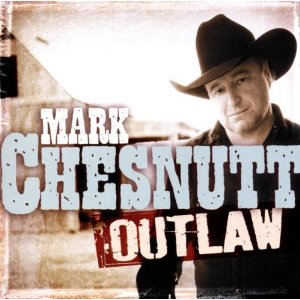 In the ’90s, Mark Chesnutt had a string of 21 Top 10 singles, eight of them topping Billboard’s country chart. He played George Jones (hailing from the Possum’s hometown of Beaumont, Texas) on the heels of Dwight Yoakam’s Buck Owens.

Despite its crossover success, the neo-traditionalist veered off course with his cover of Aerosmith’s ballad “I Don’t Want To Miss A Thing,” and when a couple of albums flopped, in typical Nashville fashion, he lost his major-label deal.

He regained his street cred in 2004, with a nice back-to-the-roots album, Savin’ The Honky Tonk (on the indy Vivaton) and now picks up where he left off, with an even bolder hardcountry statement: an all-covers album from “outlaw” artists and songwriters.

From Willie and Waylon (the latter represented three times, counting Jimmy Bryant’s “Only Daddy That’ll Walk The Line” and Neil Young’s “Are You Ready For The Country” – both part of Jennings’ repertoire) to two each by Hank Jr. and Kristofferson, Chestnutt obviously relishes sinking his teeth into the material.

Not surprisingly, tending bar at this audio saloon is Pete Anderson. Yoakam’s longtime producer handles guitar, bass, and harmonica (deferring to Mickey Raphael on “Bloody Mary Morning”) with an assist from keyboardist Michael Murphy, who co-produced Anderson’s blues outing, Even Things Up. He trades chicken-picked squawks with Gary Morse’s steel on “Need A Little Time Off For Bad Behavior” and summons a “Thousand Miles From Nowhere” vibe for “Desperados Waiting For A Train.”

At the risk of alienating Chesnutt’s diehard fans while seeking a new roots-leaning audience, Anderson could have gone further out on a limb by bringing in, say, Jason Ringenberg to pump up Chesnutt’s Waylon-ized take on “Are You Ready For The Country.” As it is, Amber Digby is a deft choice as duet partner on Shel Silverstein’s “A Couple More Years.