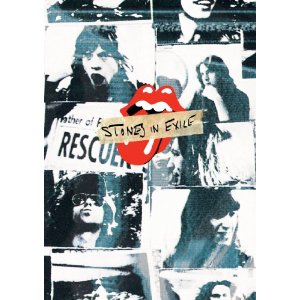 Some people think Exile On Main Street is the best album the Rolling Stones ever recorded. Those people are wrong. And it’s certainly not “the rock and roll Bible,” as Sheryl Crow proclaims in this documentary on its making and lasting mystique.

Crow (one of several personalities interviewed for the DVD, including Don Was, will.i.am, Jack White, Martin Scorsese, and, for no apparent reason, actor Benicio Del Toro) comes to this conclusion because of the songs’ juxtapositions and marriages of rock’s building blocks of blues, country, and gospel – as if that weren’t the case with the preceding Beggars Banquet, Let It Bleed, and Sticky Fingers,or, to some degree, Goats Head Soup that followed.

To put it another way, “We went back to our roots with Beggars Banquet, and then we just continued in that way. I don’t see a lot different in Exile On Main Street from the two albums before or the one after it. They’re all my favorite albums of the career. I think that’s when we were at our peak – musically, inventively, creatively, and onstage. We were dynamite. No one could come near us onstage. No one.” That’s bassist Bill Wyman speaking, in another of the film’s interviews.

The five albums Wyman mentions were, not coincidentally, all produced by Jimmy Miller. Although he’s another interviewee, he’s sadly underutilized, as he’d no doubt be able to considerably illuminate the musical side of things.

All of the members talk about recording with no master plan, just accumulating tracks as they’d always done – eventually stopping to determine which songs comprised “an album.” The “sprawling, gutsy” (to quote Mick Jagger) double-LP Exile was even less focused than usual. Keith Richards says, “I never plan anything. This is probably the difference between Mick and myself. Mick needs to know what he’s going to do tomorrow; me, I’m just happy to wake up and see who’s hanging around. Mick’s rock, I’m roll.”

He’s speaking, of course, of Jagger, but another key figure during this period was lead guitarist Mick Taylor, the 21-year-old who left John Mayall to replace the Stones’ once-leader, Brian Jones – wetting his feet on “Honky Tonk Women” and a few tracks on Let It Bleed before really making his presence felt on Sticky and Exile. “Musically, he was a better musician than any of us in the band, definitely,” Wyman adds. “Some of the things he did were just amazing.” Indeed, a song like “Casino Boogie” would be almost a throwaway if not for Taylor’s bluesy playing.

What makes this documentary interesting is, in part, the same thing that made the album compelling: the story surrounding it (of the Stones moving to France as tax exiles and fitting in sessions, and various other excesses, at Richards’ villa over a six-month period). The other selling points are the Stones’ participation (Jagger, Richards, and Charlie Watts are executive producers) and the inside glimpse that the abundance of stills and footage, both current and archival, afford.