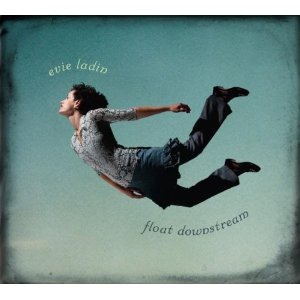 “Old-timey” music used to be the province of grizzled dudes with tobacco-juice stains running down the front of their shirts. But in the last couple of years, younger female musicians have embraced the form, and fans of roots music discovered that old-timey music is a lot more palatable – and hence more popular – when performed by women.

Banjo player Evie Ladin employs the older claw-hammer technique, which she combines with polyrhythmic arrangements to emphasize the rhythmic elements of old-timey style.

Ladin’s music preserves the rhythms of old-timey music while removing some of the discordant unison playing. Her rhythms are also rock solid, with a certainty of pulse that old-timey music rarely has. Some of the credit for the rhythm should go to co-producer Keith Terry, who plays all drum and percussion parts. The other co-producer, Mike Marshall, adds both guitar and mandolin parts. The overall recording quality of Float Downstream is exemplary, with a spacious-but-natural reverberation and big drum and percussion sounds.

Ladin has cobbled together a fun first album, full of rhythmically interesting music performed by musicians with super chops. What’s not to like?