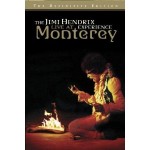 Forty years after the fact, some people (people who weren’t around at the time) might say that Jimi Hendrix wasn’t all that revolutionary. These people would be wrong.

There had been sonic experimentation prior to Hendrix (prominently by Jeff Beck and Pete Townshend), and some of Hendrix’s influences were blues players and the R&B chordal style of guitarists like Curtis Mayfield and Bobby Womack. But the resultant whole was not only a seamless amalgam of myriad influences but also something absolutely, utterly brand-new. Curtis Mayfield was from Chicago; Jimi Hendrix was from Mars!

In addition to the landmark debut set by the Hendrix Experience (shown almost in its entirety on the DVD and en toto on the CD), the DVD includes “American Landing,” a new documentary that, unlike D.A. Pennebacker’s “Monterey Pop,” focuses on Hendrix, placing him in the context of the festival. The stage is set by interviews with performers and organizers, including John and Michelle Phillips of the Mamas & The Papas, Lou Adler, Derek Taylor, and Chas Chandler, as well as the Experience’s drummer and bassist, Mitch Mitchell and the late Noel Redding.

This is the show that literally made Jimi an overnight legend, and it’s easy to see why. Hell, if he’d walked off after the blistering opener, a reinvention of Howlin’ Wolf’s “Killing Floor,” legendary status would have been cemented. Instead, he plowed through a set that included originals “Foxey Lady,” “Wind Cries Mary,” and “Purple Haze” (“Can You See Me” wasn’t captured on film, but is included on CD) and covers of Dylan’s “Like A Rolling Stone,” Billy Roberts’ “Hey Joe,” and the Troggs’ “Wild Thing” – the latter, of course, culminating with Hendrix on his knees, “sacrificing” his Strat. In flames.

Even if you were lucky enough to see Hendrix live, it’s truly staggering to see how confidently he commanded the stage in front of an audience that minutes earlier had no idea who he was. But then wouldn’t you be confident if you were the best guitarist in the world?

This article originally appeared in VG’s Jan. ’08 issue. All copyrights are by the author and Vintage Guitar magazine. Unauthorized replication or use is strictly prohibited.

Soulfarm – Scream of the Crop