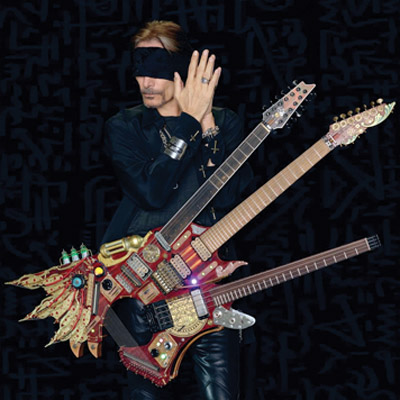 After decades of technical shred-dom, Vai returns to his musical mindset prior to David Lee Roth, composing soundtrack-scaled material that is powerful and dramatic. “Teeth of the Hydra” is a showpiece for a new triple-neck Ibanez – listen for the wild harp and bass drones recorded live on the instrument. Listen for Whammy Pedal madness on “Apollo in Color,” as well as glorious lead tone and effortless virtuosity; that’s Swedish über-bassist Henrik Linder unleashing a whiplash solo.

The guitarist dives into a deep creative zone for “Little Pretty,” his almost-limitless musical imagination proven with dense, Mahavishnu-like chord arpeggios. “Candlepower” finds him playing clean, string-popping guitar over a funky vamp that could have been on Flex-Able. Within, you can hear Steve’s “joint-shifting” method of bending multiple strings simultaneously (though fair credit goes to Jerry Donahue, who pioneered this technique more than 30 years ago).

As great as the kid from Carle Place, Long Island, remains as a guitarist, Inviolate seems more about how brilliantly he’s writing these days. This effort also begs a very real question: Did Vai just drop the best album of his career?

Coco Montoya – I Want It All Back