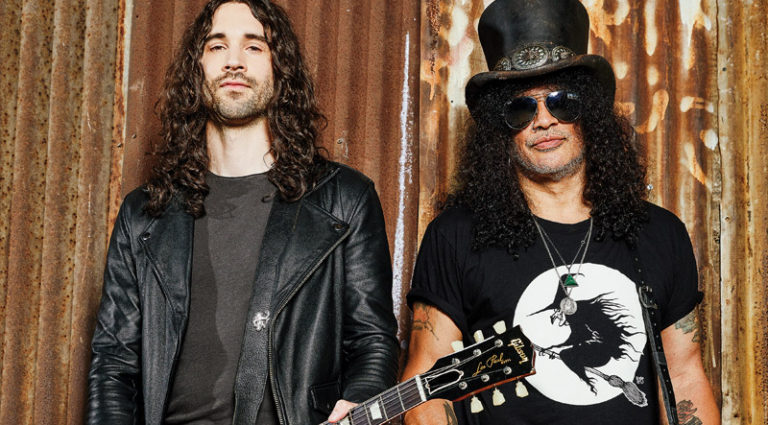 Slash is among the last of the old-school guitar heroes; there’s a line from ’60s and ’70s gods straight to him. Though permanently in the giant shadow of Guns N‘ Roses, Slash’s work with vocalist/songwriter Myles Kennedy and the Conspirators (Frank Sidoris, guitar, Todd Kerns, bass, and Brent Fitz, drums) adds to his legacy. The band’s new album, 4, is crackling hard rock – the no-nonsense, straight-up variety being kept alive by veterans, but precious few newer bands.

“The River is Rising” proves hard rock can groove – not just one-dimensionally blow your hair back – and a fast, smooth solo jumps out. The snaky, funky “Whatever Gets You By” shimmers with thick guitar and bass riffs and a fluttering guitar solo. “Actions Speak Louder Than Words” leads off with wah touches, and the sneering vocals, buzzing guitar, and stabbing bass lock together in the catchy chorus melody; overall, the tune is distinguished by its tough, laid-back swagger and a bluesy solo. “Spirit Love” features a Middle Eastern-style riff, darker vocals, and a strong ’90s feel. Scrappy punk vigor energizes “Call Off the Dogs,” while the melodramatic “Fall Back to Earth” includes Slash’s precise finale solo, spiritually similar to GNR’s “November Rain.”

Melodies and hooks permeate 4, guided by the attack of five rockers letting it rip.