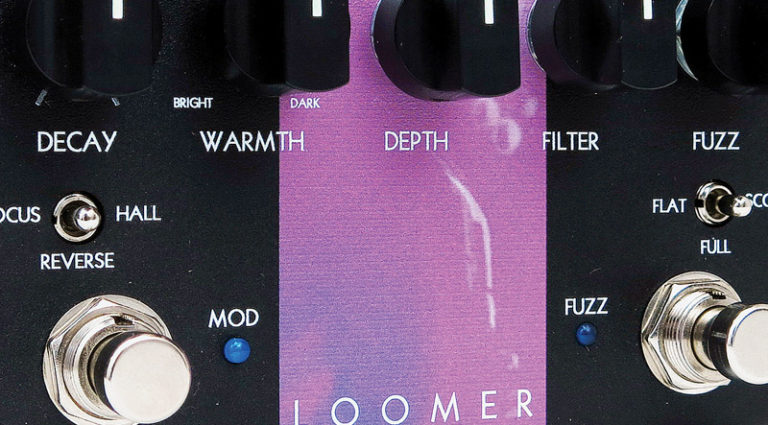 As effects pedals proliferate, so do multifunction boxes. Case in point: Keeley Electronics’ Loomer, combining three reverbs with a raging fuzz unit, each side triggered by a separate footswitch.

The Loomer’s reverb modes are activated by a microswitch. Focus mode summons a lush reverb accentuated by secondary delay. The switch’s center setting, Reverse, produces a reverb that increases in volume with a swelling delay. Reverb saturation is controlled by a Blend knob, and increasing it here generates a Hendrixian reverse guitar sound. Also evident in this mode is an envelope-controlled vibrato activated by hard strums, giving the illusion of multiple guitars playing simultaneously. Finally, Hall reverb mode generates an ambient wash combined with an octaver, for a shimmering tone. Controlling pitch and modulation in all modes, the Depth pot can also be triggered by an external expression pedal, while Decay and Warmth controls add further tone shapes.

The other half of the Loomer offers fuzz tones ranging from a hard overdrive to end-of-the-world distortion. Three tone-shaping options include Flat, which provides a flat EQ setting; Full, for more midrange and bass; and Scoop, a midrange cut with greater treble and bass.
Naturally, the real fun happens when the intuitive controls are used to combine reverb and fuzz effects, resulting in sounds ranging from subtle to highly experimental.