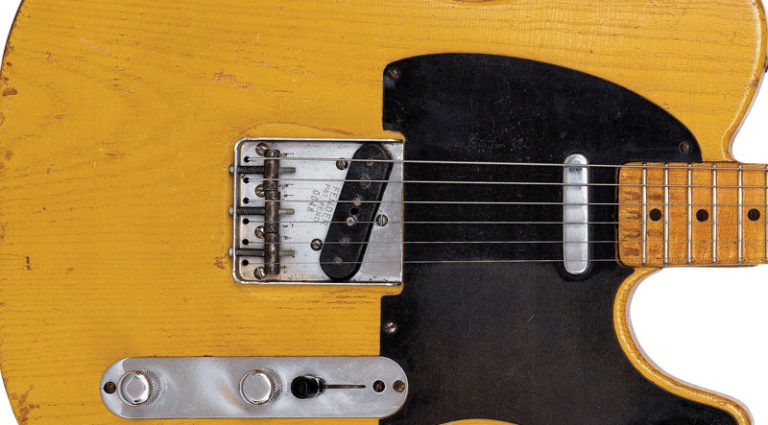 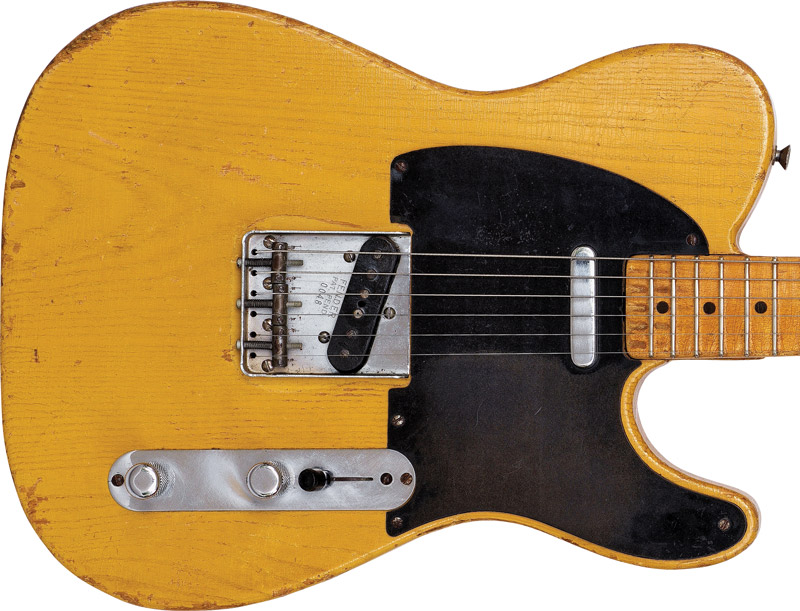 It’s routine for Vince Gill, as one of Nashville’s true connoisseurs of electric and acoustic gear, to receive tips about rare guitars for sale. In 2012, one such call shined light on a near-forgotten great – Robert M. “Jabo” Arrington.

One of a handful of early Nashville guitar greats actually born and raised in the region (the others being Harold Bradley, Floyd Robinson, Billy Byrd, and Grady Martin), Arrington’s death in 1952, at age 29, caused him to drift into the mists of obscurity.

Aware that Gill’s main guitar was a white ’53 Telecaster, Arrington’s family wondered if he’d be interested in acquiring the 1950 Broadcaster that Jabo played on the Grand Ole Opry stage as he led Little Jimmy Dickens’ band, the Country Boys. Only a handful of Nashville veterans remember the young guitarist with the aggressive, blazing style, but Gill was well aware of the guitarist’s history thanks to his longtime friendship with Dickens.

“Jabo was [Grady Martin’s] mentor,” said the late Bob Moore in a 2009 interview. Legendary today as Nashville’s preeminent session bassist, at 17, he worked in Dickens’ original band. “Most of the stuff that Grady picked up in his early career was from Jabo, who was the guy at that time.”

Arrington, born in 1923, was a working guitarist by the ’40s. At Nashville’s WLAC, he worked with regional acts like singer/songwriter/guitarist Zeb Turner. At the Grand Ole Opry, he was part of Paul Howard’s Western-swing band (Arkansas Cotton Pickers) and among the earliest “hot” lead guitarists on the Nashville scene.

Arrington and Martin became friends, and the pair began emulating the Jimmy Wyble/Cameron “twin guitar” ensemble Bob Wills added to the mid-’40s Texas Playboys. In ’46, Jabo and Grady traveled to Chicago to back fiddler Curly Fox and his wife, vocalist Texas Ruby, on a Columbia recording session. Their stabbing twin-guitar passages stood out on “Ain’t You Sorry That You Lied,” “Travelin’ Blues,” “Have You Got Someone Else on the String,” and other tunes.

His blazing lead style particularly stood out with the Cotton Pickers, one of only two Western-swing bands affiliated with the Opry. The group became a talent incubator; among its members in the ’40s were a 17-year-old Hank Garland (nicknamed “Junior”), newly arrived from South Carolina, along with future Texas Playboy steel guitarist Billy Bowman, jazz drummer Joe Morello, and Moore himself.

Arrington and Garland became the Cotton Pickers’ new guitar team, and their stellar playing stood out on Howard recordings like “Rootie Tootie” and the stomping “Cotton Pickers’ Special.” The latter featured twin-guitar work and scintillating solos. The young Garland took a more-jazzy approach while Arrington unleashed a fierce string-bending break well ahead of its time.

Garland moved on to other bands and Nashville session work, but Jabo remained with Howard when he and the band quit the Opry to play dance halls in Western-swing-friendly regions around Texas, Oklahoma, and Arkansas.

Success, however, proved fleeting. When Howard ran into financial problems and couldn’t pay his musicians, Arrington and Moore quit. “Jabo had a wife to support,” Moore explained.

Back in Nashville, Arrington walked into WSM at the optimal moment.

“There stood Jimmy Dickens,” Moore remembered. At 29, the diminutive West Virginia native was the Opry’s newest member, brought onto the cast by his musical hero, Opry luminary Roy Acuff. Vocally, Dickens drew much from Acuff’s emotional Appalachian singing, but while Acuff’s sound was traditional and acoustic, the much younger Dickens wanted a hotter, flashier, more-modern band.

“Jimmy asked if Jabo could put a band together,” Moore recalled. “Jabo said, ‘I got you a bass player right now.’ I got (guitarist) Floyd Robinson with us and they hired a comedian and a steel-guitar player Jimmy knew, and that was our band.”

In 1950, they became the Country Boys, in honor of Dickens’ second Top 10 single.
Robinson and Arrington played behind Dickens onstage, but for recordings, Moore brought in Martin, even then a rising star in Nashville’s early studio scene, to play the second guitar part, as they had a few years earlier.

“Grady and Jabo worked out that twin-guitar thing together right there in Castle Studios,” Moore added. “I witnessed it – was part of it.”

The twin guitars that graced Dickens’ 1950 hits “A-Sleepin’ At The Foot of The Bed,” “Country Boy,” and “Hillbilly Fever” gave Dickens a distinctive, identifiable, often raucous sound he maintained for many years on his records and onstage.

Over time, the Country Boys gained stature as one of Nashville’s finest backup bands, a distinction that extended to their early steel guitarists – Billy Robinson, Walter Haynes, and Buddy Emmons.

Arrington, who bought his Broadcaster in 1950, performed and recorded with Dickens into ’51. When he moved on, he didn’t travel far. Joining WSM as an Opry staff musician, he accompanied various performers onstage every Saturday night. Tragically, on July 28, 1952, he died of pneumonia in a Nashville hospital and was interred at Woodlawn Cemetery.

Gill met Arrington’s family at the Opry on March 17, 2012, nearly 60 years after the legendary guitarist’s passing. Scheduled to perform that evening, he remembers examining the instrument, calling it “…a great old Broadcaster, in beautiful condition. It just sat under the bed after (Jabo) passed. It was a two-year-old guitar.”

Gill offered to buy the guitar. The family agreed, but had a request. Given its hallowed pedigree, they hoped to see and hear it played on the Opry stage one last time. 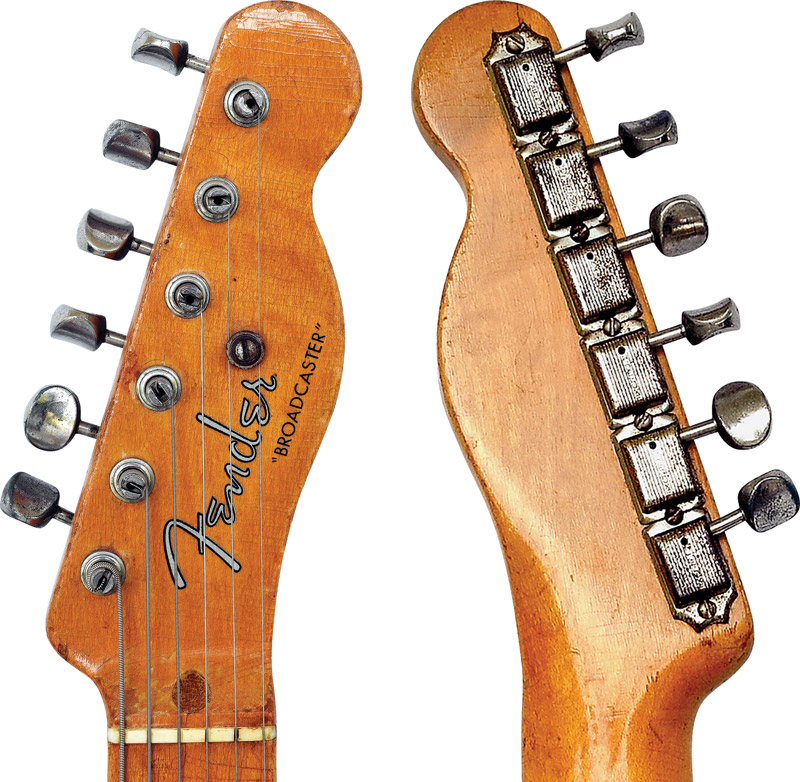 They were in luck. Aware Dickens was playing the Opry that same night, Gill asked his friend if he could sit in, telling Dickens, who had fond memories of working with Arrington, about the guitar.

“His eyes lit up,” Gill recalls. “It was so neat! I went out and played with Jimmy, and of course, the family’s there, in tears. So it was kind of meant to be.”

When Dickens died in 2015, Gill and Carrie Underwood sang Gill’s valedictory ballad “Go Rest High On That Mountain” at his January 8 memorial service at the Opry. Strumming Jabo’s Broadcaster, Gill introduced the number, noting the guitar’s ties to Dickens and how he acquired it.

Gill explained his thinking in a 2019 interview for VG. “I figured this part of history brought (Dickens) here, it should be part of the story that takes him out of here.”