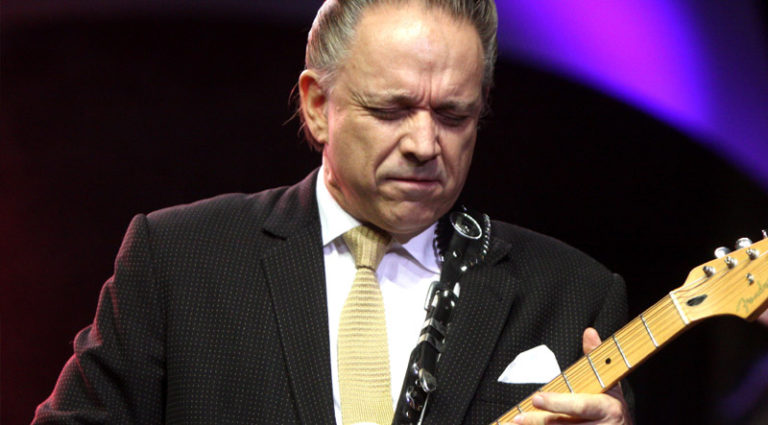 Don’t think music can be life-changing? Try moving 1,700 miles. In 1987, I moved from Northern California to Austin, Texas, and music was the reason. Bands like the LeRoi Brothers, Tail Gators, and Teddy & the Tall-Tops played a part, but the biggest reason was the Fabulous Thunderbirds.

On a trip to Austin in ’76, I was introduced to the band’s harpist/frontman Kim Wilson and guitarist/leader Jimmie Vaughan. The night I walked into a near-empty restaurant called Rome Inn, to the sounds of them doing “Scratch My Back,” my senses were altered. It took another 11 years to make the move, but it was never off my radar.

My notion of what a young, white blues band could sound like was upended. I’ve said it before, and it’s not a perfect depiction, but the T-Birds sounded like grown men. They weren’t long-haired hippies in faded jeans (though plenty of groups fitting that description could play their asses off). There was something serious and authoritative about the quartet of Vaughan, Wilson, bassist Keith Ferguson, and drummer Mike Buck.

I sang the band’s praises like a warning of what was to come. Within weeks of the T-Birds playing the 1978 San Francisco Blues Festival, local bands got haircuts, traded their jeans for pegged slacks, and hunted down old Strats – the group’s effect was that profound.
Jimmie, older brother of Stevie Ray Vaughan, left the Thunderbirds in 1990, mere months before Stevie’s death and the release of their only tandem album, Family Style. He’s gone on to a successful solo career, and over the years he’s contributed to albums by dozens of artists, from Bo Diddley and John Lee Hooker to Eric Clapton, Carlos Santana, and Bob Dylan.

With five CDs, a vinyl LP of Do You Get The Blues, two 45s, and a 200-page booklet, The Jimmie Vaughan Story covers a generous swath of that career. There’s bevy of previously unreleased cuts that are every bit as good as the material so familiar to fans. The cuts by Vaughan’s pre-Thunderbirds band, Storm, are true rarities. Doyle Bramhall, Sr.’s soulful vocal on “Have You Ever Loved A Woman” is stunning, as is Jimmie’s channeling of Freddie King.

The ballad “When Did You Leave Heaven” makes you wonder why it’s just now seeing the light of day. And Jimmie’s lap steel takes the spotlight on the standard “Harbor Lights.”
I’ve never heard Vaughan shred, and I mean that as the highest possible compliment. I’m sure he could and did, maybe when his band, The Chessmen, opened for Jimi Hendrix in ’68, but overplaying wouldn’t fit with what the Thunderbirds were about, nor his later solo work. It was about the integrity of the overall sound, and he made his case with just the essential notes. One of my favorite tracks is “Sugar-Coated Love,” where Jimmie plays only a rhythm throughout, laying down the sort of Jimmy Reed in overdrive groove that was the band’s stock-in-trade.

On the other hand, it’s mystifying that “Full-Time Lover” isn’t included, particularly a live version, because it showcased how he could build a slow-blues solo.
Along with appearances with greats like Albert Collins, Bonnie Raitt, and Little Milton, there are collaborations with Austin mainstays Bill Carter, Lou Ann Barton, and Denny Freeman. You also get to visit the tiny Continental Gallery, and hear Vaughan and Billy Gibbons rip through the Nightcaps’ “Wine, Wine, Wine.”

The booklet is chock full of photos from the 70-year-old’s life and career. Baby pics of him and Stevie, teen bands, the Thunderbirds’ house-band period at Antone’s blues club, backing blues legends Buddy Guy, Hubert Sumlin, and Jimmy Rogers, and his solo career.
The narrative, culled from an interview with journalist/producer Bill Bentley, rambles and gets repetitive. For someone who has interviewed Jimmie, which I have, you can definitely hear his voice. But for the uninitiated, it could be hard to follow. For instance, he mentions “Blind George,” but unless you were around Austin in the early ’70s, you wouldn’t know he was referring to singer/pianist Blind George McClain (which could have easily been inserted). But when Jimmie talks about losing his brother in a helicopter crash, calling to tell their mother, having to identify the body, it’s downright moving.

My one objection with the package is the absence of personnel credits, which seems unnecessary since that information would be easily obtainable for the record company. This isn’t just Jimmie Vaughan’s legacy; it’s part of the legacy of every bandmate and sideman who played a part in the recordings. Sure, it would take up space, but a few less snapshots of Jimmie wouldn’t have hindered the package, as many just repeat the image of him onstage with his Stratocaster.

Am I nitpicking? I don’t think so, and I’m sure neither would a drummer or bassist whose work with the bluesman was good enough to merit inclusion.

2021 Dan Forte; all rights reserved by the author.