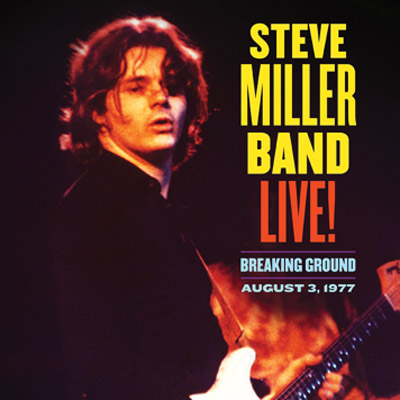 Riding high on the smash Book Of Dreams album, this ’77 concert presents the Steve Miller Band at their absolute peak. Captured at the Capital Center in Landover, Maryland, Miller was ruling the FM landscape of the day; this gig includes impeccable versions of hits, plus deeper cuts like Robert Johnson’s “Come On In My Kitchen,” “Wild Mountain Honey,” and “Mercury Blues.” Sixteen songs tell the tale of an artist who walked the line between pop, rock and roll, blues, and psychedelia.

This peak SMB lineup featured Miller on guitar and vocals, as well as Lonnie Turner on bass and David Denny and Greg Douglass on guitar. Robust riffage from Steve’s Ibanez Iceman is unleashed with extra crunch, heard in the intros to “Rock’n Me” and “Fly Like An Eagle.” Douglass torches a slide solo on “Jet Airliner,” while trippy delay effects imbue “Space Intro.” Listen to “Take The Money and Run” for dueling guitars and outlaw tales.

Live! is a love letter to high-school students of the ’70s, and reminds us of Miller’s skills as a guitarist, tunesmith, and pop-rock icon with a bluesman’s soul. It’s also the next best thing to time travel.

Big James and the Chicago Playboys