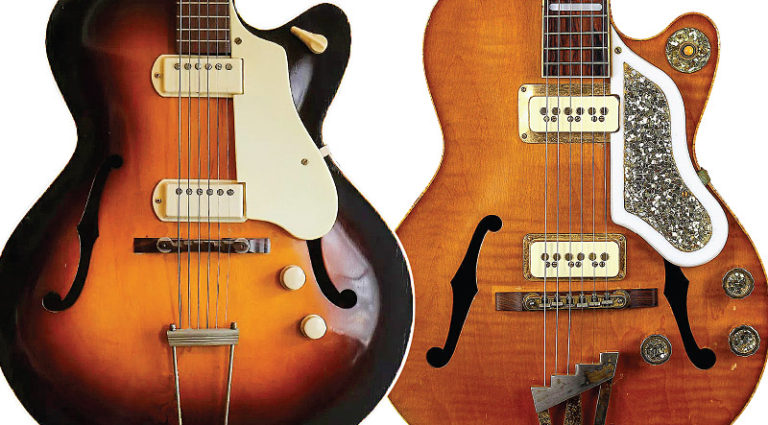 In the history of guitars, the tale of United Guitar Corporation is a ghost story – little documented and lost in partially self-imposed obscurity.

Operating from 1939 into the late ’60s/early ’70s, United was a wholesale firm that built instruments exclusively for others to sell. In ’52, it made one brief attempt to compete in the market, but quickly retreated to its original business plan.

In retrospect, it seems a limited strategy, building only for re-sellers, though it’s common in other industries. Kay and Harmony did it, but they also mass-marketed their own products, sometimes competing with themselves. Compared to larger firms, United lost some economy of scale, but ran a more-economical operation, concentrating on production with no sales department and the accompanying marketing and distribution headaches.

In the 1950s and ’60s the ever-growing guitar market meant United had enough business to support this plan. Gibson, Martin, and Fender sold only through franchised dealers, while Harmony, Kay, and Danelectro were “open” lines, meaning anyone could sell them. The catch was that small stores couldn’t buy direct from a manufacturer; instead, they had to go through a wholesale “jobber.” Many came to realize they all sold mostly the same products, and eventually some wanted their own line to offer as an exclusive. Mail-order marketers like Sears and Montgomery Ward did the same, and the “custom brand” began to flourish.

United, based in Jersey City, appears to have done nearly all of its trade with jobbers in the New York area. They likely didn’t cater to mail-order firms, as identifiable United instruments seldom appear in direct-market catalogs. Harmony and Kay serviced many such clients, and Sears additionally relied on Danelectro. United’s management may have been content operating at a certain level with mostly long-term familiar clients, especially since the 1950s/’60s guitar boom provided years of solid growth.

Positively identifying United Guitars product is an inexact art; they built thousands of low-grade guitars, mandolins, and ukes very similar to Kay and Harmony, and few have cared to parse the distinction. United’s better products were provided mostly to specific re-sellers; even if unbranded, they can be recognized by nuances such as top curve, sound hole and cutaway shape, and neck joint/heel profile. They also use a more Gibson-like truss than their Chicago competitors. As a rule of thumb, after the early ’50s, a re/unbranded guitar is almost certainly no longer from Gretsch or Regal, and if Kay and Harmony can be eliminated, it’s likely built by United.

Knowing the brand names used by New York jobbers is key, and, with a little experience, their better instruments are easy to spot.

By the ’60s, United had a local doppelganger (or possibly spin-off) – Codé guitars, pronounced “co-day,” according to their limited advertising – a small ad appeared in The Music Trades, reading almost line for line like United’s pitch. The address given was 1016 Clinton Street, Hoboken, a building that like most of Hoboken’s industrial areas stands today as modernized residences.

The relationship between United and Codé is unknown, though they’re often linked as a single entity; it’s unlikely two such similar firms would spring up independently so close together, so there’s probably a connection. Codé business listings appear after 1956 and disappear by the ’70s, its output a mystery.

United’s most-prominent client was the Sorkin Music Company, 559 Sixth Avenue, Manhattan, whose distinctive top-line instruments were sold under the Premier brand from the ’40s through the late ’60s. Premier guitars are most notable for their eye-dazzling look – Sorkin bought basic hollowbody instruments from United then glammed them out with glitter plastic and gold trim. Premier guitars were cataloged with multiple finish and hardware options.

The Premier name first appeared after World War II, when the music industry expected a huge upswing in accordion popularity, mated to electronics – Premier’s first heavily promoted products were accordion pickups. But then, modern jazz, country, and rock and roll popularized the “Spanish” electric guitar and made it so you’re not reading Vintage Accordion. The first Premier-branded guitars appeared around ’54 – the earliest likely subcontracted from Kay, not United.

Within a year or so, United was Sorkin’s primary supplier. Though usually classed as “cheapies,” ’50s hollowbody Premiers were not that cheap, priced from $125 for a single-pickup archtop up to $385 for the fully dressed 17″ Deluxe. They offered flashy cosmetics, quality construction and sometimes high-grade hardware. Basic models could be ordered with different finishes and a range of upgraded fittings including DeArmond pickups, Grover tuners, Bigsby vibratos, and even actual Gibson Tune-O-Matic bridges. The Deluxe had gold-plated hardware and a stepped tailpiece (slightly) like a D’Angelico. Keeping up with the field, Premier even offered stereo wiring in 1960, though it fell as flat there as everywhere. The electronics were sourced locally from Franch Electronics, in Woodside, which also supplied Guild. Its designs resembled Gibson’s P-90, usually wound less-hot.

Marketed as “Designed Exclusively For the Professional,” the ’50s Premier line included a range of 16″ and 17″ pressed-wood archtops. The most popular were smaller hollowbody electrics called Bantams – handy little versions of United’s 13.5″ laminated-wood archtop electric. The design is most similar to Guild’s M-75, but with a deeper body and an arched back. Unlike variations sold by other jobbers, the Premier Bantams usually have sound holes. There was even an extremely rare bass version, initially called the TV Bass and offered as early as 1954, presaging the Guild M-85 by 14 years!

The Bantams were sold in Standard and Deluxe models priced from $179.50 (plain trim, single pickup) to $335 (two pickups, gold-plated hardware) with the same hardware as their large-bodied siblings. Three finishes were available – black, sunburst, and a unique natural top with a gold body, sort of a reverse Les Paul. The headstock was faced in black plastic engraved with a script Premier logo and torch emblem; some Deluxes have the design inlaid in pearl. Most Premiers had a generic rosewood or ebony bridge, but the Tune-O-Matic was available for an extra $13.50.

Premiers are the only known United-made guitars to carry serial numbers, though there’s no guide to decoding them. They appear to be a single (probably sequential) series of four digits hand-stamped on small brass plates reading “Multivox Corporation of America, New York NY. Made in USA.” They run at least into the 4000 range but may have started at 1000. Bantams were easily the most popular.

United also built the dreadnought flat-top Western Special sold under the Premier brand (including one with a built-in pickup) but apparently had nothing to do with the scroll-body Premier solidbody that appeared in ’58. The New York story is those were built in the Strad-O-Lin workshop in Manhattan. United also supplied Sorkin with lower-grade hollowbody and flat-top guitars sold under the Royce, Beltone, Leo Master, and Marvel brands along with a line of Bobby Henshaw signature ukes with “choice woods and exclusive internal construction.” In the early ’60s, this must have added up to hundreds, if not a few thousand instruments per year for this one account.

The ’60s brought changes at Sorkin usually related to cutting costs that gradually cheapened the line. Tuners went from Waverlys and Grovers to Japanese-made open-backs – some of the first on American-made guitars. By ’64, the large-body single-cut instruments were discontinued in favor of a thinline double-cut design so rare today it suggests minimal sales. By that time, Premier was also using Japanese pickups and the guitars developed an almost desultory feel, as Sorkin began concentrating on a lucky windfall. Sometime prior to the Beatles’ arrival, they became the sole U.S. distributor for Höfner. Imagine the orders for a certain bass that flooded their offices after February of ’64!

Premier amps were then offered alongside Höfner instruments, and the house line guitars were de-emphasized.

That year, one of United’s smaller accounts closed after the passing of John D’Angelico. One of the company’s principals, Frank Forcillo, had longstanding ties to the master of Kenmare Street. When a D’Angelico customer ordered a guitar with built-in pickups, John would not hand-carve a body. Rather, he used a laminated United chassis with his own neck, finish, and hardware. These are superlative guitars in their own right, though not acoustically comparable to a real D’A.

Another name found on United products is Orpheum. In the ’30s, this venerable brand (borrowed from Rettberg & Lange’s 1910s banjo line) was passed to jobber Maurice Lipsky, in Manhattan. Subcontract suppliers included Kay and Gretsch; only some Orpheum-branded guitars were built by United. There are even a couple with D’Angelico provenance – an experiment of the early ’40s.

The 1962 United/Lipsky catalog models are pretty generic, with typical construction and fittings. These appeared opposite an Orpheum line of Wandré guitars from Italy – a short-lived connection. Wandrés were, at the time, cheaper than the New Jersey models! United also supplied some of Lipsky’s cheaper Stadium line and at least an occasional Paramount electric.

Nearly identical instruments were available, labeled Serenader by Bugeleisen & Jacobsen, another jobber operating around the corner at 5 Union Square. B&J’s Stewart and Stewart Orifonic brands appeared on United-made guitars in the ’50s, primarily midline electrics with Fransch pickups and plain trim. These are both full-sized cutaway acoustics and small-body electrics, in this case called Midgets, with a solid top devoid of sound holes. B&J’s early-’60s budget Serenader electrics appear to be low-end United archtops with their Japanese-made Kent pickups.

Except for the lowest-grade Serenaders, United guitars disappear from B&J catalogs in the early ’60s. By ’63, the Stewart name was applied only to amplifiers, and B&J was carrying an Espãna line of flat-tops (primarily classicals) made by Levin, in Sweden – the European sourcing undercut American makers on wholesale price.

However, much worse news was in the offing. 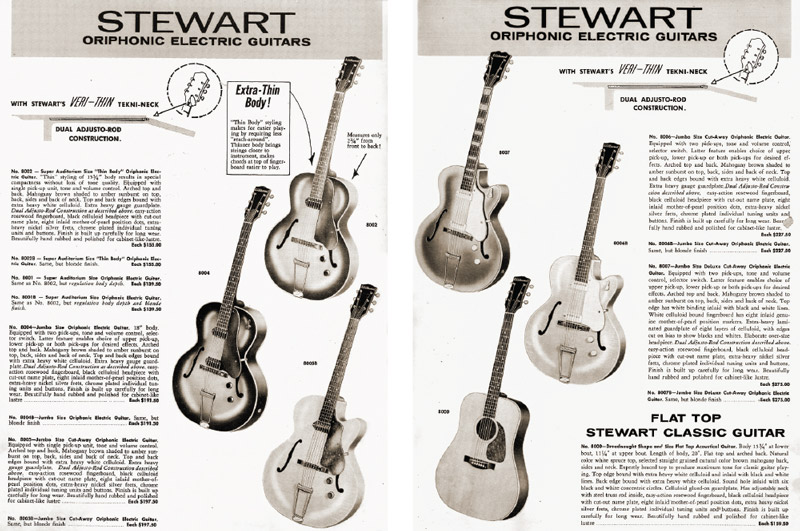 While United Guitars products were mostly cheap to make, they could not compete with factories tooling up in Japan. An ominous note bound into the 1963 B&J catalog cheerfully states, “Lower Tariffs mean Lower Prices… Effective September 1st 1963, the U.S. government has reduced the tariff applicable to Kent electric guitars.”

This would sound the death knell for the U.S. firms that supplied the bottom of the market; not only United, but Kay, Valco, and even Harmony would eventually succumb to the tide from the East.

Some very cheap unbranded flat-tops with basic accoutrements including painted-on binding, pickguards, and fretboard markers that are often referenced as Harmonys are actually United product. Many from the ’60s have a large “Made in USA” black-ink stamp on the inside back, where Harmony generally used a smaller green stamp. United also built bottom-line mandolins, ukes, and baritone ukes under many brands, and often not branded at all.

Another factor that has lessened the appeal of United’s legacy is that their celluloid plastic came from the same local suppliers as Guild, Gretsch, and D’Angelico, and they’ve very often suffered binding deterioration, relegating them to dusty back rooms as not worth fixing. Otherwise splendid Premier guitars have suffered this sad fate, helping push them to the sidelines of history.

While glittery Premiers are the most memorable, the better guitars United provided to its New York clients are all worthy of belated respect.

Part one of this feature appeared in May ’21 issue.8