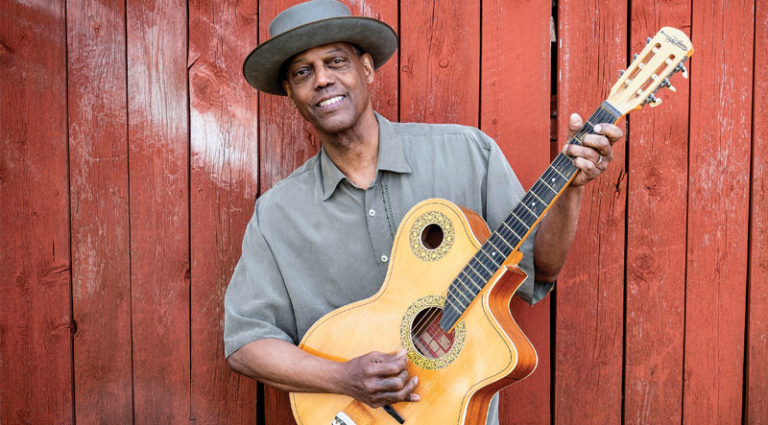 It’s almost a curse to categorize a musician a “blues artist,” as it implies someone who simply plays standard I-IV-V chord progressions and variations. Eric Bibb is well beyond that. On his new album, Dear America, the singer/songwriter and acoustic fingerstyle ace goes beyond the usual forms into songs that are deep, soulful, and yet still quintessentially blues. Bibb knows his musical roots in and out and, throughout this set, has delivered one of the best American guitar albums of 2021.

We talked to him about his unique and expansive approach to that thing we call the blues.

These songs are blues without being locked into standard progressions, like the great 1920s blues artists did. This comes out on “Whole Lotta Lovin’.” Is this something you’re conscious of?
Yes, it is and it’s also something that Glen Scott, my longtime friend and producer, recognizes and enhances with his unique production. My fascination with fingerpicking has steered me toward the earlier blues forms; my heroes – and sheroes – of early blues had varied repertoires, spanning genres. As self-accompanying songsters, they could be as unconventional as they pleased. So yes, this tradition is a huge inspiration to me.

“Dear America” is reminiscent of the rhythmic hill-country blues of John Lee Hooker – the mandolin brings in that country-blues flavor, too. Was that the plan?
Definitely. Christer Lyssarides is a fine player who really knows how to connect the dots. Your question also makes me ponder the term “Americana.” Blues is emphatically Americana – musically speaking, we wanted to point out the interrelatedness of all of America’s folk music traditions.

The lyrics are so powerful on Dear America. What comes first in your writing – words or the chords?
It varies. Sometimes a lyric idea will pop up, possibly inspired by something I’m reading, and the whole narrative will almost write itself before I even pick up a guitar. More often, a series of chords or a funky modal blues riff will give rise to a song. As many of the songs on the album refer directly or indirectly to American history, it was an exciting challenge deciding whose voice would tell the story.

Aside from blues, there are other musical flavors. “Tell Yourself” is a bit like James Taylor’s fingerstyle approach. Were players from the singer/songwriter school an influence?
James Taylor is certainly an influence, as were many others who came out of the ’60s. Seeing performers like Richie Havens, Joni Mitchell, Tim Hardin, Jerry Jeff Walker, and Kenny Rankin up-close had a powerful impact on me. Mind you, at the same time I heard Son House, Reverend Gary Davis, and Jimi Hendrix – I saw them in concert, as well!

Eric Gales scorches “Whole World’s Got the Blues” with his Strat. One can image he didn’t need direction and you just pushed the Record button?
You’re right! As a guitarist, Eric inspires awe – playing the blues, he’s the high priest.

There are stunning guitar tones on the record. Which acoustics did you use, and how did you decide on mics?
The most unusual acoustic I play is from Sofia, Bulgaria. You can see a similar instrument on the cover of an early Ali Farka Touré album. Another unusual guitar – a customized Otwin 12-string with a resonator, created by Peter Wahl in Germany – is what I play on “Born Of A Woman.” The electric on that track and “Tell Yourself” is from Staffan Astner, a brilliant player I’ve worked with for many years.

When you were a kid in New York City, how did Bob Dylan end up in your living room?
At age 11, my parents threw a big party at our home in Queens. My dad, Leon, was a well-known folk singer, and many of the guests were folk celebrities. In 1962, Dylan was invited, and he showed up very late. I walked up to him and said, “Hi, I’m Eric. I play guitar, too!” So, we had a chat in our crowded living room. Bob was twice my age and advised me to “Keep it simple and forget all that fancy stuff.”

Being in NYC in the mid ’60s, were you in the thick of the Blues Project, Reverend Gary Davis, Dylan, Odetta, etc.?
A resounding yes (laughs)!

What was that scene like?
It’s impossible to describe the richness, the passionate devotion to the music, the righteousness, the naiveté, and the beauty of that scene. Between my weekly trips to Washington Square Park, my parents’ record collection, classical guitar lessons, and access to the fine playing and top-shelf instruments of the guitarists who played with my dad… I was in guitar heaven!