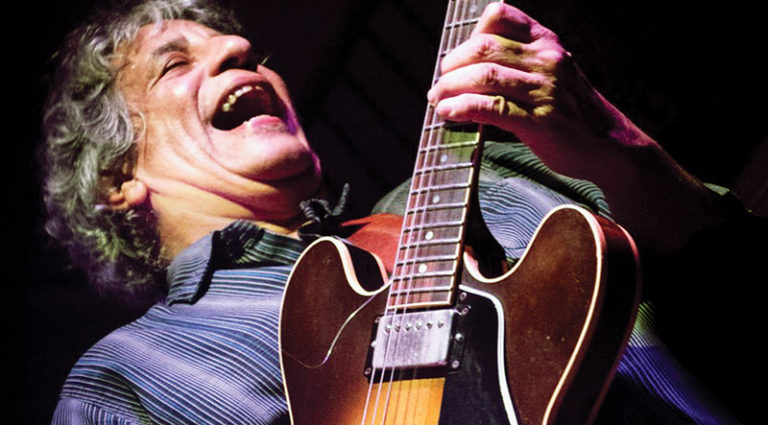 Armed with a new deal with Alligator Records and producer Kid Andersen (of Rick Estrin & The Night Cats), Chris Cain recently recorded Raisin’ Cain, an impassioned blues masterpiece full of hard-luck stories, a superb band, and his earthy-yet-sophisticated blues-jazz guitar. It’s been a long, strange trip, and Cain checked in with VG to tell the tale.

How did Raisin’ Cain come about?
I hadn’t had a record with my band on it in so long. I was going to make one and put it on my own label, and I wrote tunes over the course of a year, and once they were together, I booked Kid Andersen’s Greaseland Studios. He, Tommy Castro, and some other people talked to Alligator, and they were interested in releasing it. I’m really happy because of all the records I’ve made; this one has the most stuff. The tunes have more meat, and it was a blast. It’s the best record I’ve ever made and I’m extremely happy.

The album has strong band interaction.
I was in tears when I heard what my band played. As an older person, I feel like I can say more with less. It felt like someone else was writing these tunes. It’s like somebody else’s life I’m watching, but it’s me. Kid has a really good way of not letting people get knotted up. He’s very serene and knows how to diffuse things when somebody’s getting knotted up. He knows how to take it from there and do something different. He’s an amazing guitar player, but he knows what to do with those machines to make it feel like when you were playing it. He has a gift, and he put a lot of love into this album.

You blend the best qualities of blues and jazz guitar.
I’ve always been a blues player. When my brother came back from Viet Nam, he had The Sidewinder, by Lee Morgan, George Shearing, and The Montgomery Brothers, Tequila, by Wes Montgomery, and Straight, No Chaser, by Thelonious Monk. I listened to those records all the time, and they grew on me. I found out more about jazz, and it went into a blender and came out like this. It’s all the stuff I dig.

I met Freddie King and Albert King in my teens, and it was amazing to be in a room with them. Albert looked like a building with a Flying V. I never missed B.B. King and Ray Charles when they came to town – my dad always knew where B.B. was playing. My band opened for Albert, and while I was playing, I smelled pipe tobacco; he was standing right there nodding his head and saying, “Uh-huh.” Every time I’d play Memphis, he’d come to my gigs – and he brought Otis Clay. It was like I was dreaming. He was so nice and sweet to me; he was my friend.

You’re also a Robben Ford fan.
I saw Robben with the Charles Ford Band. At that point, I thought I had this thing handled with the guitar, but when I heard Robben, I thought, “Sheeesh!” That really inspired me to play through changes like he did. It started me learning jazz vocabulary. I was playing blues, and these guys were playing II-V-Is. I was listening to jazz, but I never heard anyone put it into the blues. The Charles Ford Band opened for Boz Scaggs and I was like, “Who are these guys?” The way he was singing and using chord voicings, I had to put that into my playing. He knocked me right off my chair.

You’re a minimalist when it comes to gear.
I use a Music Man 112 RD50 combo. I had a Boogie that blew up on a session, so I went to a music store and it was the only amp they had with tubes. I plugged in and it just sang on the top end, and the drive didn’t get too distorted. With my 335, it’s the sound I hear in my head. After I saw Robben play with the Yellow Jackets, I got a 335, but it was lost on tour. A pal of Herb Ellis saw me at a gig in Arkansas and later, Herb had Gibson send one. It’s a factory second from the ’80s. That’s the guitar I use now. It’s called Melba, after the toast.

What’s next?
We have a bunch of release parties, and hopefully, we’ll play out a little bit.