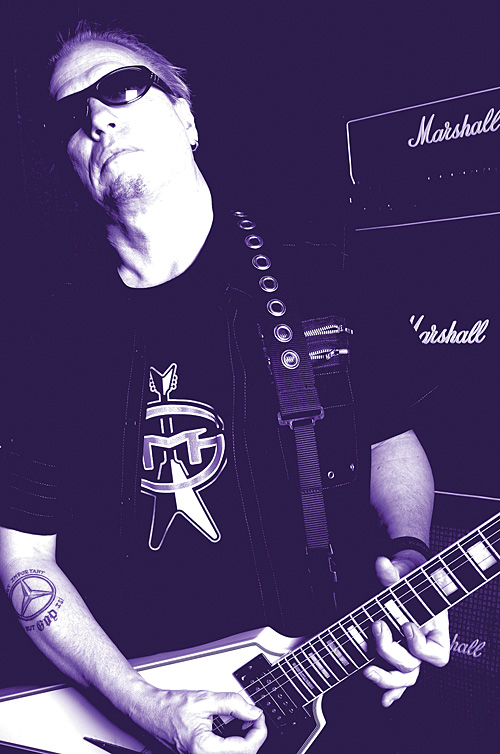 One of the most influential guitarists in hard rock history, Michael Schenker has imbued the music of UFO, Scorpions, and his own MSG with soaring, light-speed guitar solos.

More recently, he released Gipsy Lady, an album by his Schenker-Barden Acoustic Project, one of several non-electric projects he’s working on, and he also maintains a brisk career with the Michael Schenker Group. We spoke with him about his gear, technique, and omnipresent V-style guitars.

How did the Acoustic Project come about?
I was curious to hear how my acoustic instrumentals would sound with vocals, so I asked [former MSG singer] Gary Barden to have a go on it. When I listened to what Gary did with them, I was amazed. So we carried on until the album was complete. It was that simple.

How do you adjust your technique when playing acoustic?
I don’t really do anything special, but in general, acoustic guitar needs to be played differently than electric because of the heavier strings – if you use a light gauge, the guitar does not sound too good. The main thing is that I am not bending strings as much as electric and, without as much sustain, you need to play very melodically to touch the hearts of others. It is always good to put melody in – that’s part of my overall approach, electric or acoustic.

Tell us about your acoustic Flying V.
I spotted that guitar at a photo session for Dean Guitars in the States. I said to their CEO, Elliott Rubinson, “You never told me that you make this kind of V,” and asked if I could have a couple of them. I played it in Newcastle at an Acoustic Project performance and it worked out great. I plugged it into my Marshall with a bit of dirt to make it sound more rock and roll.

What amps and effects do you take on the road?
I use two JCM 50-watt Marshall two-channel amps and the Marshall cabinets with Celestion greenbacks. My only effects are a Dunlop Dimebag wah and a Boss delay and chorus. The other pedals are just volume controls, a Marshall footswitch, and a Boss tuner.

You’ve used many Flying V’s over the years, and now use the Dean Michael Schenker V. How do they compare to your old Gibsons?
The Deans are much stronger and more solidly built than my old Gibsons, and they “sing” extremely well. I think the pickups are DiMarzios – I’m not much of a technician, so I can’t really give you a whole description of the electronics. I tend to do things by ear and feel only. I don’t even know all the different names for scales, but I can spot a great sound immediately.

Your classic UFO rig in the ’70s was a 50-watt Marshall and a wah. Tell us about that setup and what it did for your signature tone.
It was one of those nice, older plexi Marshalls, but you needed to know what you wanted, sound-wise, in order to get a good tone. With the wah pedal, I used to just sweep through the range and stop when I found the sound I like. Then I just left it in that position – the “sweet spot.” It was sometimes a Vox or occasionally an old Dunlop. I just plugged the Flying V straight in to the wah and into the amp, which was probably set with everything on 10.

Give us some thoughts on your guitar legacy.
With the Scorpions, I did my first album at age 15, called Lonesome Crow. On the album was my first-ever composition, titled “In Search of Peace of Mind”; Klaus Meine wrote the lyrics and it has remained important to me throughout my life. I was influenced by the original rock players, like Jimmy Page, Jeff Beck, Eric Clapton, and Leslie West, but I didn’t copy their licks after I was 17 – I was quick in breaking out of that influence and developing my own style. I knew exactly what I wanted as far as tone, playing, and writing. So, to answer your question, what I brought to the Scorpions, UFO and MSG was originality, but also a lot of feel and a strong sense of melody. Of course, the Scorpions eventually developed into an original band all their own, especially with the writing between Klaus and my brother Rudolf. Rudolf writes very much like me, but simpler. We are both very emotion-based guitarists and writers.