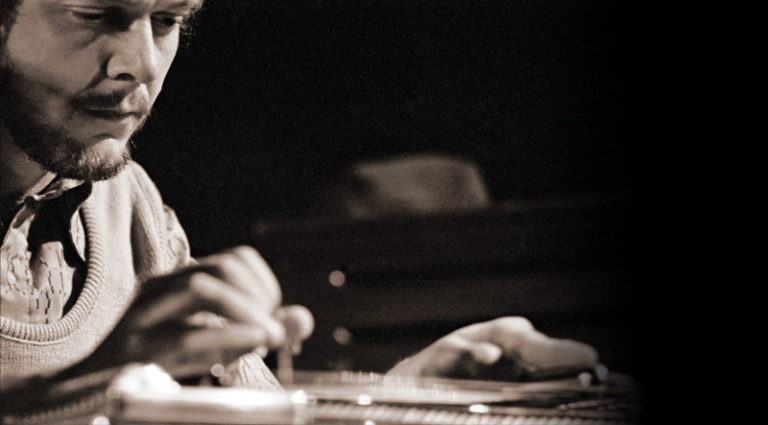 Rusty Young, the versatile pedal-steel guitarist, guitarist, singer/songwriter, and original member of the pioneering country-rock band Poco, died at his home after suffering a heart attack on April 14. He was 75.

“Our friendship was 50-plus years,” Poco co-founder Richie Furay sadly reflected on social media. “Together, we helped create what became known as the Southern California ‘Country Rock’ sound.”

Born in Long Beach but raised in Colorado, Norman Russell Young began learning lap-steel and guitar at a Denver music store at age six. He first performed publicly in his family’s church in 1956 and bought his first pedal-steel, a Fender 1000 doubleneck, in ’60.

Two years later, at 16, he taught guitar and sold instruments at Don Edwards’ Guitar City, a focal point for Denver-area steel players like Donnie Buzzard, who enlightened him on the instrument’s true potential by showing Young how to create unconventional sounds.

Country rock was in its primordial stages when Furay, Messina, and Young co-founded Poco (originally Pogo) in ’68, adding bassist (and future Eagle) Randy Meisner and Young’s friend, drummer George Grantham. From the start, Young added twang to the band’s gentle, relaxed country rock. Their debut, Pickin’ Up the Pieces, included his signature instrumental “Grand Junction,” featuring pedal-steel and resonator, which was also prominent on their ’71 recording “Hoe Down.”

“He was my hero,” said Nashville steel-guitarist Steve Fishell. “Rusty added a decidedly Western flair to his unique steel style. His technique was flawless; he brought an aching sadness to songs like Poco’s “Bad Weather” and Buffalo Springfield’s “Kind Woman.”

Unlike most pedal-steelers, Young was a showman. Lucky Oceans, Asleep at the Wheel’s original steeler, was still new to the instrument when they opened for Poco in Washington, D.C. in 1970.

“Rusty got up from the metal folding chair and played his steel with one of the legs!” he recalled. I was elated!”

Fishell had a similar introduction.

“I first saw Poco in October, 1971, in Santa Monica,” he said. “Without any gimmickry, Rusty blazed through a climactic Hendrix-style solo, tipping his steel sideways and windmilling like Pete Townshend. I was floored!”

Young contributed to the much-admired 1970 instrumental anthology Suite Steel: The Pedal Steel Guitar Album with Buddy Emmons, Sneaky Pete Kleinow, JayDee Maness, and Red Rhodes. His selections revealed a versatility and depth only hinted at by his work with Poco. He began the easy-listening hit “Everybody’s Talkin’” straight, then launched into pure bebop.

“I was shocked when he went from playing the sweet melody of ‘Everybody’s Talkin’’ into a modern jazz, altered-chord/skipping-triplet solo,” Oceans said. “Rusty was representing a cadre of steel players who woodshedded their jazz chops on the road, in practice rooms and little clubs all over America, but seldom recorded those wild skills.”

“Rusty was also a rock star,” Fishell adds. “He made it okay to run pedal-steel through Leslie speakers, distortion units, wah pedals – anything to break the instrument out of its country straitjacket.”

In Poco’s early years, Young’s instrument preferences moved from Fender to ZB, Sho-Bud and later, Carter. In those days, his tunings were E Chromatic and C6. As his stature grew in the ’70s, he wrote a monthly column for Guitar Player.

As personnel changed, he spent less time behind the steel as he audaciously moved out to front the band and became its main songwriter. “Rose of Cimarron” was a Young original, as was their biggest hit, 1979’s “Crazy Love.”

Inducted to the International Steel Guitar Hall of Fame in 2013, he dissolved Poco a year later but wasn’t ready for retirement. His 2017 solo album, Waitin’ For the Sun, featured contributions from Furay, Schmidt, Grantham, and Messina. And when Young reunited Poco for a 2018 50th Anniversary tour, he sang, played guitar, resonator, and pedal-steel. Asked by the U.K. publication The Beat whether his dreams came true, Young simply answered, “I’ve had a great life.”