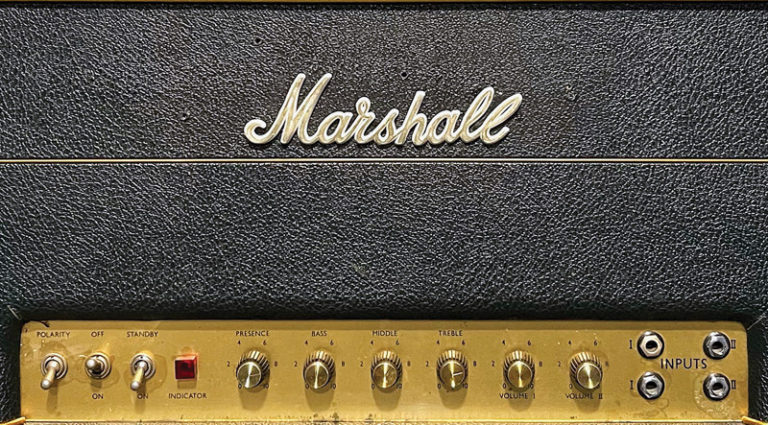 Any player who shows up these days with a 200-watt guitar amp will elicit a hearty, “Are you out of your mind?” But when the Marshall Major came along 50 years ago, its power was simply a solution to a very real problem.

The story of guitar-amp design includes a chapter on the power wars of the ’60s. As popular music became even more popular, the venues in which it was played became larger as rock became harder; power and volume became part of the style. PA systems grew bigger but were still simply an aid to hearing vocals, drums, and other acoustic-sound generators, so guitar amps had to grow to keep up. And grow they did.

Charlie Watkins unveiled what might have been the most powerful PA to date with the WEM rig he set up for the 1967 Windsor Jazz and Blues Festival (an event that had segued to full-on rock over the previous few years). With 40,000 concertgoers expected and headlining performances from Fleetwood Mac, Cream, the Small Faces and others, Watkins rigged a system with 10 WEM SL100 power amps, for a total of 1,000 watts. Piffling by today’s standards, it was unheard of at the time – and it’s worth noting that the ’66 festival had made do with one 100-watt PA stack each side of the stage (also, Watkins was brought up on public noise violations after the show).

So, if PA systems were going down the megawatt road, the logical thinking was that guitar amps needed to head that way, too. Some players had already been using double stacks with two 100-watt Marshall Super Leads, the amps Pete Townshend had urged Jim Marshall to create a couple years before to keep up with the maelstrom, and that’s often how Jimi Hendrix and others attacked the problem. But it’s reasonable to think some artists might want all 200 watts coming out of one box – a request Marshall responded to later with the 200, renamed the Major the following year.

The 200-watter was designed around four hulking KT88 output tubes driven by high plate voltages to achieve unprecedented output levels and a clean, crisp, and extremely punchy response. Early renditions had a simple three-knob control panel and a preamp stage more akin to a hi-fi amp, the thinking being that loud-clean was required more than loud-dirty. By the arrival of our featured amp in 1968, however, Marshall had revised the layout to resemble other plexi-era amps, with a full complement of Treble, Middle and Bass knobs, plus Presence. The circuitry, however, was very different from the plexi archetype, and the Major departed from the JTM45/plexi’s 5F6A tweed-Bassman-derived design in several other ways, though in some it paralleled components and configurations Fender was also moving toward.

Rather than the classic Marshall scenario of placing the tone controls after a cathode-follower stage comprising the second preamp tube, the Major – once it was revamped to the T-M-B EQ stack in ’68 – placed its network between the second and third gain stages provided by the second ECC83 (a.k.a. 12AX7). This was more akin to the way Fender started doing things in the ’60s, though the Major was three gain stages into the signal chain by the end of its tone stack, whereas Fender’s brownface and blackface amps sandwiched their controls between just the first two gain stages.

Also deviating were Marshall’s placement of the Volume control before the second gain stage and ahead of the tone controls, where the Fenders followed after, and the use of quite different signal-capacitor values in this EQ network, which still favored the .022µF caps used in the cathode-follower stacks in their other amps.

The Major employed an ECC82 (equivalent of a 12AU7) in the long-tailed-pair phase inverter, a lower-gain preamp tube more often used in hi-fi amplification. That was clearly an effort to go the way Fender had gone with the 12AT7 in that position in blackface amps starting in late ’63/early ’64, though the “AU” took the theory even further, more thoroughly squelching distortion in the phase-inverter stage.

One other significant and rather un-Marshall-like quirk of the Major’s design is the use of an ultra-linear output stage. This configuration connects not only the plates of the output tubes to the output transformer, but also ties the screens to taps in the OT’s primary, in this case via four ganged pairs of massive five-watt disc resistors, each bolted to the chassis alongside its related tube socket. The goal here was to enable a more stable, linear, and – again – high-fidelity performance with lots of volume. Sunn amps would also use ultra-linear output stages, as would some of Fender’s most powerful amps of the ’70s. In any case, couple this more-complex topology with the thrum of 700 volts DC on the plates of the KT88s, and there was a lot of power coursing through this output stage.

If you’re getting the impression all this made the Major sound massive, you’d be right. That kind of power appealed to Ritchie Blackmore with Deep Purple, occasionally Jimmy Page with Led Zeppelin, and perhaps most famously, Mick Ronson with David Bowie. Later in his career, Stevie Ray Vaughan also sometimes turned to the Major’s might.

Few other viable audio tubes are capable of handling the plate voltages applied to the KT88s to generate a full 200 watts in the Major, so when supplies dried up in 1974, Marshall stopped making the amp. It also rendered the Major’s 200-watt output stage into the rare Park 150 head of the era, but switched things up for the front end of that stealth model.

Amp maker and Park authority Mitch Colby says that while the Park 150 was built on the Major’s platform with four KT88s, “What most people do not know is that the preamp is very different; the Major uses three preamp tubes and differs from the typical Marshall in that the tone stack is driven off the plate of one of the preamp tubes. In the Park 150, the preamp has the typical Marshall cathode-driven tone stack and the Major phase inverter, and an additional gain stage.”

While players today are wary of plugging into either rendition, given the tamed-down volumes to which we’ve become accustomed, Mike Forgione, owner of this fine example, says there’s really no justification for such reluctance.

“I don’t know why folks are afraid of these at 200 watts,” he said. “Sure, it gets loud, but its like the difference between 50 watts and 100 watts – not that much louder, but fatter! Clean tones of all types abound in this amp, and it overdrives nicely with the right pedals. I think because they’re so rare, no one really knows how they sound, other than from the famous people that play them… Oh, and it’s heavy!”

Forgione also says the “unofficial history” of his example indicates it was previously owned by Blaze Bayley, former lead singer with Wolfsbane, who took over vocal duties in Iron Maiden from 1994 to ’99, and is thus addorned with a red “Blaze” stenciled on either end of the cabinet. No doubt, it does.