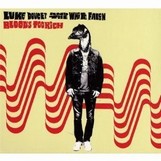 Canadian singer/songwriter Luke Doucet is so dedicated to his Gretsch White Falcon that he named his band in its honor. Though that iconic instrument doesn’t take center stage until well into the album’s opening song (“Long Haul Driver”), when he gets it going he’s definitely got a handle on it.

At times recalling Link Wray, as in the intros in songs like the title cut and some well-constructed solos, Doucet doesn’t overplay. Instead, he opts for memorable riffs with big doses of bright midrange twang on mostly original material that sounds like a cross between ’50s rockabilly and ’80s pop. Underscoring that is a faithful version of The Cure’s “The Lovecats,” which is a little cutesy compared to the better of Doucet’s songs, though occasionally (as on “Cleveland”) he’ll step into that territory himself. But most of the time he brings things around before going too far in.

Doucet benefits from having his sincerity tempered with a small injection of cynicism. But he’s not self-indulgent or sappy; he’s got a good head for melody and there are all too many sourpusses and hardasses out there making music, anyway. But Doucet still believes in the magic. That, his pleasing voice, his knack for lyric imagery (“The Commandante”) and accomplished straight-ahead guitar playing combine to good result.