The relationship between Japanese instrument builders and domestic distributors was critical in the evolution of guitar sales in the United States, and was arguably the most important factor in the demise of domestic budget-grade guitars in the late 1960s.

Japan’s Matsumoku company was a family-owned woodworking enterprise founded circa 1900, and established a relationship with Singer shortly after World War II, contracting to build cabinets for sewing machines manufactured in Japan. It entered the guitar market in the mid ’50s and in the ensuing decades made parts or instruments for Yamaha, Aria, Greco, Vantage, Univox, and Westbury, among others. Gibson (technically, it’s parent company, Norlin) contracted with Matsumoku to make Epiphone instruments in the ’70s. It also had a relationship with St. Louis Music (SLM), which distributed the successful Matsumoku-made Electra instruments.

The Matsumoku-made Westone brand came along at the start of the ’80s, and SLM distributed it, as well, phasing out some Electra in favor of Westones, some of which evolved through the decade to become unique and innovative in their own right.

One of the more traditional-looking Westones was the limited-edition Genesis guitar and bass, created to commemorate the distributor’s 65th anniversary. The bass, listed as model XA6520 in catalogs, retailed for $569 when it was introduced in ’87 and was available in three colors – Burgundy Pearl (XA6520BUP) on a poplar body, and Transparent Walnut (XA6520TWA) or Transparent Burgundy (XA6520TBU) on a Canadian ash body. The Burgundy Pearl and Transparent Burgundy instruments had quite different hues – the former being more purple while the latter was more cherry-colored.

The two-plus-two headstock has Westone’s own Trak Wind Deluxe tuners, and a close look reveals its W logo is an eagle silhouette. The string nut is carbon graphite, and its three-piece maple neck measures 19/16″ wide at the nut. The 34″-scale rosewood fretboard has 24 frets and the fretboard markers are smaller than average. 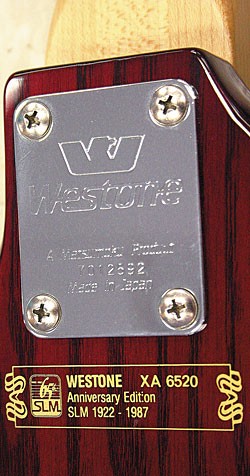 The instrument’s neck is attached with four bolts, and the neck plate is embossed with the Westone logo and name, “A Matsumoku Product,” the serial number, and “Made in Japan.” As if that wasn’t enough information, a sticker just below the neckplate notes the brand and model number, plus the fact that it was an Anniversary Edition. Also included were the SLM 65th anniversary logo, and dates (1922-1987). The neck joins the body at the 19th fret on the bass side, 21st fret on the treble side. At first glance, the body seems undersized considering its slim waist and slender cutaway horns – at its widest point it measures 12 3/4″ and narrows to 7 3/4″ at the waist. And while the diminutive body might imply “neck-heavy,” it’s not, possibly because it’s made of Canadian ash. So it balances nicely yet weighs just 9 1/2 pounds.

The most obvious oddity on the XA6520’s body is the “…exclusive Genesis stepped body.” From the neck joint to the cutaway horn, it’s a quarter-inch recess in the face “…carved away to allow easy slap technique.”

The pickups are Westone’s powerful-but-passive Magnabass III and Magnabass IV units (note the difference in polepiece configurations) controlled by a three-way toggle and a funky knob arrangement; a master Volume (near the bridge pickup), Tone control for neck pickup (center), and Tone for the bridge pickup (near the input jack). The knobs are unique, with serrated sides and a slight funnel shape that narrows at the bottom. The bridge is a Westone’s Magnacast brass unit and has spring-mounted, individually intonatable saddles. The bass’ strap buttons are oversized.

The high degree of build quality evident in Matsumoku-made instruments has gone largely unheralded over the years, and the XA6520 is as exemplary as it is unique.