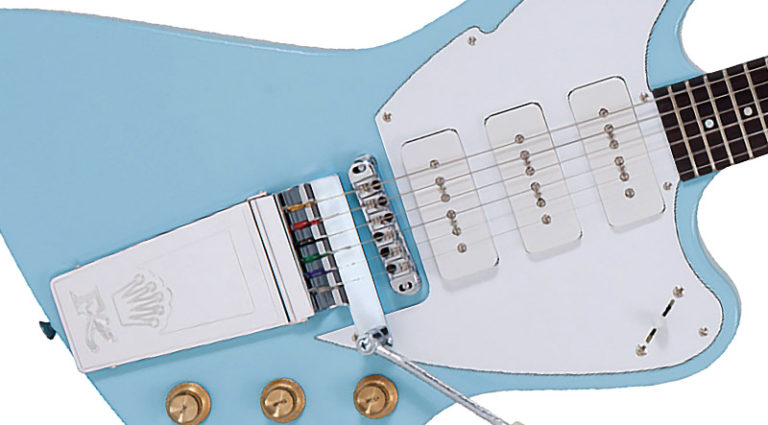 What do you get when you cross a Gibson Explorer with a Fender offset and Firebird vibe? The answer is the Fret-King Esprit III, designed by Trev Wilkinson as part of his Black Label series.

The Esprit III is a striking instrument. With its familiar lines and features, there’s a new feeling of déjà vu at every turn. For example, one immediately notices the reverse headstock, the raised center section, and the three-pickup setup that harkens to Gibson’s reverse and non-reverse Firebirds of 1963-’66. The long, flashy chrome vibrato unit evokes more Gibson.

The Esprit III body – a sort of Explorer/offset mashup – is constructed of Agathis, an evergreen species common in the Southern Hemisphere. Its density and strength make it ideal for boat construction and it’s slowly finding favor with guitar builders. The set maple neck is topped with an attractive rosewood fretboard, the scale length is 25″, and the graphite nut is 1.67″ wide. The neck is a chunky C shape and the fretwork on the test guitar was superb. A roller bridge is standard to keep the Esprit III nicely in tune.

The guitar sports three Wilkinson WP90 stacked pickups, and the Vari-coil knob adjusts single- or double-coil response. Match this clever feature with a five-way selector switch, and you have an extremely versatile guitar.

Strapped on and plugged into a vintage tube amp, the Esprit III was extremely playable – very comfortable, with no neck dive. If there’s a small gripe, it’s that the dense Agathis makes it hefty, at just shy of 10 pounds, and there is no tummy cut on the back.

The WP90s are medium-/high-output units that sparkle and chime at low volume and roar when paired with overdrive and/or fuzz. The ability to choose the amount of single-/double-coil response is a big plus for the gigging musician. Classic blues and rock riffs and string bends were effortless, again, with a variety of tonal options. The neck pickup provided an excellent “woman tone,” and the bridge pickup roared with copious sustain.

Fret-King has yet to make a splash in the U.S., but given the quality and value exhibited by the Esprit III, that should change. This is a reasonably priced guitar that will hold up to the rigors of four sets in a sweaty bar, or on a concert stage.