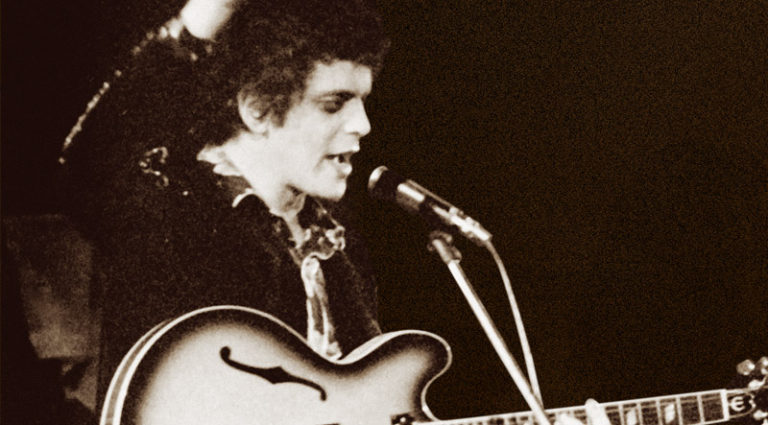 Eccentric and enigmatic, composer/singer Lou Reed gained notoriety in the mid-’60s while fronting the NYC band Velvet Underground. Not particularly talented musicians, the group reached audiences by creating songs with compelling observations on subjects like sex and drug addiction.

As a solo performer, Reed (1942-2013) built an image as a moody, antisocial rocker using songs like his Top 20 hit “Walk on the Wild Side.” Amongst guitar players, though, he’s best remembered for two live albums, Rock ’N Roll Animal and Lou Reed Live, which captured his performance at Howard Stein’s Academy of Music on December 21, 1973. Both contained potent versions of Velvet Underground songs as well as solo material.

Reed’s new band included two high-profile guitarists from Detroit – Steve Hunter and Dick Wagner. Both had played on Reed’s 1973 album, Berlin, and for the tour, they were joined by bassist Prakash John, drummer Pentti Glan, and keyboardist Ray Colcord. Before the Academy of Music gig, they’d played only a two-week tour of Europe and a week of shows in the U.S.

At the time, Hunter usually played a Gibson Les Paul TV model, and he recently reflected on some of the most-lauded guitar work in his long career, including the instrumental “Intro” to “Sweet Jane,” which he composed with harmony guitars.

“In the early ’70s – and even the late ’60s – lots of bands were doing guitar harmony lines,” Hunter said. “Wishbone Ash was brilliant at it, but there were others. And I did it for the same reason – it sounded good!”

After the intro, the band segues into the crunching power chords of the Velvets’ “Sweet Jane” before Reed delivers the most expressive singing of his career to that point.

“That intro was the first piece of music I wrote that was published, and it’s one of my favorites,” Hunter said. “And, the way the band played the piece was the best it ever sounded. I tried it with other bands, but it was never the same.

“On the original vinyl and first CD versions of both albums, Dick is in the left channel and I’m in the right,” he added. “That’s the way we were, physically, onstage. For some stupid reason, many subsequent reissues either reversed that or kept changing it throughout the album. That, to me, was a seriously dumb thing to do, and I don’t understand it.”
The second song, an extended rework of “Heroin,” is arguably the high point of both albums; a creepy emulation of a drug fix that builds in volume and intensity, it ultimately threatens to hurtle out of control, abetted by screaming guitars. Wagner composed its harmony guitar lines.

Phase shifters were still new and novel at the time, and their shimmering sound is put to good use on numerous tracks, especially on Rock ’N Roll Animal.

“Yeah, maybe we used that MXR Phase 90 a bit too much!” Hunter said. “There weren’t many pedals to choose from in those days, but I did fall in love with it. Later, I got the Phase 100, which is still a great-sounding pedal.”

Lou Reed Live also offered its share of memorable guitar tones and riffs. One highlight was a 10:40 version of “Oh, Jim” on which Hunter and Wagner wail individually.

“Dick started the soloing at the end,” Hunter said. “On Berlin, ‘Oh, Jim’ had the same ending except I played the solos, and onstage it was naturally suited for that type of extended soloing.”

Why does he think guitarists hold both albums in such high regard?

“Well, I hope it’s because they’re good live albums,” he said. “We all agreed we would not go back into the studio and fix things. That was important to us; what you hear is exactly what happened. Both albums have a certain balls-and-abandon feel that appeals to people, particularly players.”

A Tribute To Chuck Berry