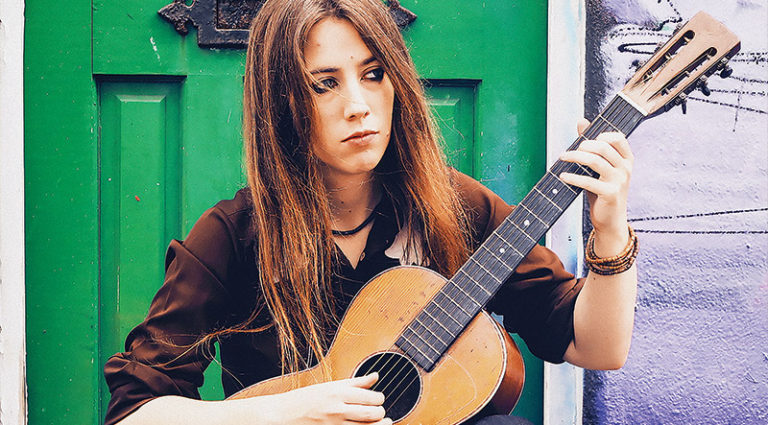 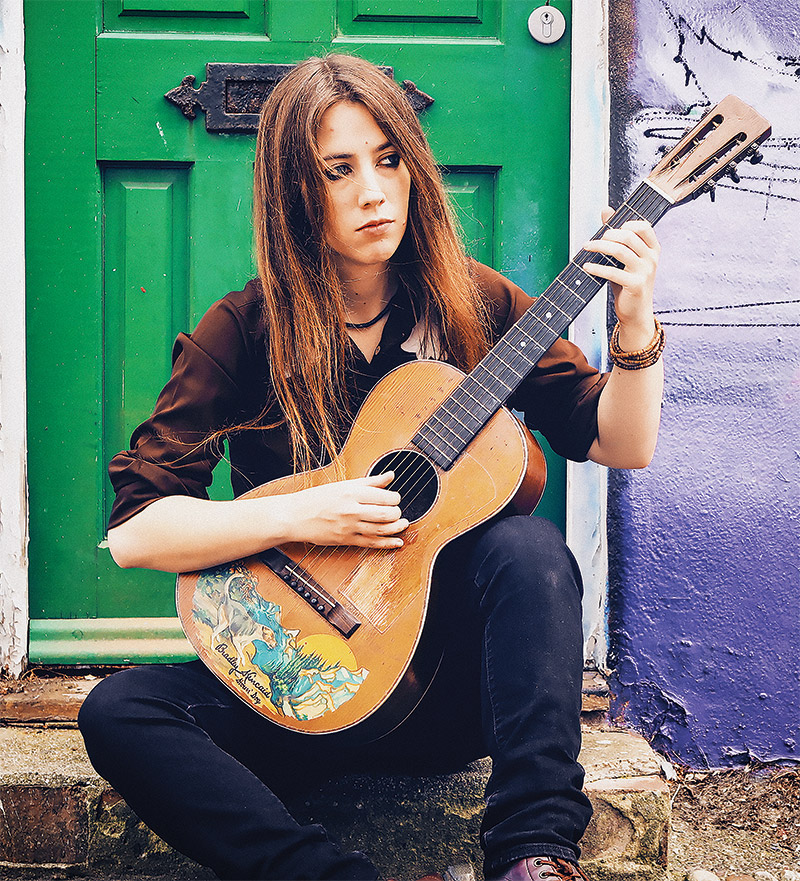 Expect the unexpected from Gwenifer Raymond. Born in Wales, England, she was inspired by underground bands like the Pixies and Nirvana, while her deft fingerpicking style was shaped by Mississippi John Hurt, Skip James, Roscoe Holcomb, and John Fahey. Just as surprising, Raymond has a Ph.D. in astrophysics and works in video-game production. Her new album is Strange Lights Over Garth Mountain, a powerful statement of solo acoustic.

“Hell For Certain” is a great showcase for your fast picking.
Speed on fingerpicking is all muscle memory really; to be honest I don’t think of “Hell” as being particularly fast. I think the goal for people when they start learning fingerpicking should be to become completely unconscious of the actions of their picking hand, as if it’s an independent entity, acting on its own accord. It can be pretty interesting to have that weird little alien hanging off the end of your wrist. Oftentimes it can, unprovoked, pull some wild ideas out of the void.

Which books and records did you learn from?
The first fingerpicking tab book I ever bought was Early Masters of American Blues Guitar: Mississippi John Hurt, transcribed by Stefan Grossman. I picked up quite a few other Grossman tab books after that, mostly country and Delta blues players. Later, I tracked down a local guitar teacher who was a great blues picker, and he introduced me to John Fahey’s stuff. From there, I moved more from that straight-blues player thing into the somewhat more avant-garde vein of American Primitive.

Were you at all inspired by the English school of fingerstyle players – John Renbourn, Bert Jansch, Davy Graham, and Gordon Giltrap?
To be honest, I wasn’t. All the early inspiration that formed my background in fingerpicking came from the American tradition – again, that old weird sound.

Nirvana opened your ears to music. How did you get to solo fingerstyle from grunge?
It was by way of their MTV Unplugged album, in which Nirvana plays a cover of Leadbelly’s version of “Where Did You Sleep Last Night.” That drove me to find the original track, and more like it. At the time, my local record store stocked a lot of this series of cheap compilation CDs called Early Blues Roots, and I bought pretty much all I could find. That’s what initially pulled me into the world of pre-war blues.

Your pieces are visually evocative, such as “Marseilles Bunkhouse, 3 am” and “Gwaed am Gwaed.”
I don’t usually actively conceive of a narrative when I compose; it just sort of empties out in an untargeted way. Thinking too hard about the act of musical expression is, in my experience, probably the best way to write stagnant music.

What attracts you to the distinctive sound of open tunings?
They simply lend themselves to solo players, in that they allow you to more easily accompany yourself with a bass layer under your melodic composition, in much the same way as the two-handed technique of piano players. For tunings, I primarily use open C, D, and G, and tend to play in the minor of those keys. If someone handed me a guitar in standard tuning, I’d get very confused.

Which guitars, strings, picks, and slides did you use on the album?
The album is all my Waterloo WL-14L kitted with Martin Monel strings, .013-.056. I play with Dunlop nickel-silver fingerpicks on my index and middle fingers, and a plastic Dunlop thumbpick. For the slide track, “Worn Out Blues,” I used a Pyrex slide from Dunlop.

Do you own any vintage acoustics?
Yes. “You Never Were Much of a Dancer” was my ’54 Gibson LG-1 and my 1928 Bradley Kincaid Houn’ Dog. A few years ago, I was gifted an 1880s Joseph Bohmann guitar by the great Henry Kaiser, in an extraordinary act of kindness and generosity. That guitar can be heard in the single, “The Three Deaths of Red Spectre.” In his day, Bohmann called himself “The World’s Greatest Musical Instrument Manufacturer.”

Recording acoustic guitar is hard under the best of conditions. Which mics did you use in the basement of your flat in England?
I recorded with an AKG 414 condenser mic and a matched pair of Rode NT5s. The upstairs neighbor’s washing machine occasionally played backup.

You design video games for a living. One assumes the video world pays better than guitar?
I’m a video-games coder, though these days I focus specifically on the audio side of things, working with audio-designers to implement sounds in virtual worlds. I’ve so far been pretty lucky to work for studios that understand that I sometimes need to disappear and go play guitar for people in strange places. I’m afraid it’s still true that video games do pay better than playing guitar – but maybe one day that won’t be the case.