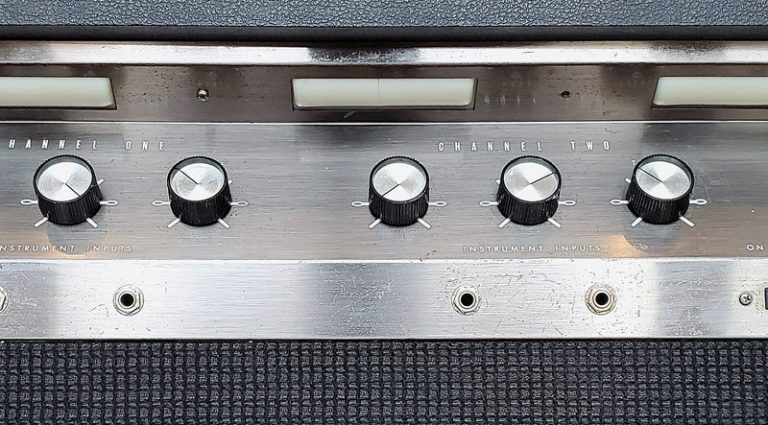 Early classic guitar amps have a way of capturing our attention. But we’re also fascinated with later creations that hit the market after a popular manufacturer’s star had faded, like this “Valco” amp that was still hitting catalogs and bandstands a few years after its manufacturer had gone bankrupt.

As much attention as Fender and Gibson have drawn over the years, plenty have recognized the sonic splendors of amps from -the 1940s to the ’60s carrying the Oahu, Gretsch, National and Supro badges. The majority were made by the Valco company in Chicago, which also manufactured amps for Montgomery Ward’s catalog brand, Airline, after the contract passed from Danelectro in the early ’60s. Considering the massive respect with which Valco’s creations are generally viewed today, and given the company’s size as well as its deep roots in the history of the electric guitar, it’s almost inconceivable it could go from being one of the nation’s most prolific amp makers to bankruptcy before the end of its biggest decade, but so it went.

Formed circ a 1940 from the remnants of the National-Dobro Company, itself a historic pre-electric manufacturer that brought its legendary resonator guitars to market in 1927, the company was created by partners Victor Smith, Al Frost, and Louis Dopyera, whose first names were abbreviated to create the new entity’s acronym – VALco. Though the company thrived for two and a half decades – as shown by its reach through OEM re-branding, department stores, and catalog sales – it was very much a victim of the boom-and-bust ’60s. The guitar market boomed, and Valco rode the wave for a time, but as trends and tastes shifted, the company had difficulty keeping up. A merger with the similarly massive Kay in 1967 aimed to help keep Valco afloat, but it went belly up in ’68.

All of which leads to a further question: If Valco went bankrupt in ’68 and dissolved shortly after, how did this apparently Valco-made Airline GIM 9151A head find its way to the Montgomery Ward warehouse carrying date codes for components that pin its manufacture to early 1970? And it’s no anomaly; others like the brethren reverb-and-tremolo-equipped 9131A kept hitting shelves (and pages) until at least 1974.

In search of an answer, we turn – as we so often have in these pages regarding anything Valco-related – to “Mr. Valco” himself, Terry Dobbs, a noted historian and repairman specializing in these amps.

“This GIM 9151A was likely made in early 1970, because I see a date code of 235-7008 on [an original] white Mallory bypass capacitor in the photo after zooming in,” he said. “Rumors are that the buyers of the amp division continued making ‘jobber’ amps for Wards, Penncrest, and others, and this would be one. The 9151A was certainly a Valco circuit design and construction, and used the paraphase inverter (unusual in this late stage of guitar-amp development) that the lion’s share of push/pull Valco amps had since the mid ’40s.”

In other words; Valco is dead, long live Valco! In a manner of speaking, at least.

Quite precisely how this happened, we cannot say. We do know, however, that Strum and Drum, an instrument import/distribution outfit established in ’64 by Chicago hardware importer Norm Sackheim, acquired the National brand name in ’69, adding to a stable that included Japanese guitars with the Norma and Noble brands. Reports have it that Strum and Drum also bought remaining Valco amplifier parts (and perhaps designs) and used them to job-out catalog amps until around ’75.

Secret history aside, this amp is an interesting creation that speaks to the manufacturer’s efforts to address the “bigger and louder” trend of the era in a product still suited to catalog-grade pricing. With four 6L6 output tubes and three 12AX7s in the preamp, the GIM 9151A had the appearance of the big 100-watt tube heads that were sweeping stages across the country. And while it was a decent-sounding creation, it certainly didn’t possess that kind of volume.

Outwardly, it appears to chase the sliverface Fender Bassman market, with two simple, independent channels, each with their own Volume, Treble, and Bass controls. A look ’round back and inside reveals separate output transformers (OTs) and 1/4″ TRS jacks wired to take the signal to two speaker cabinets, prompting any reasonable observer to declare, “Hey, a stereo amp!” But, as many later owners of second-hand 9151As that have been separated from their operating instructions have discovered, there are some confoundingly contrary issues butting against that assumption. different guitars or a guitar and bass to be amplified through two speaker cabs) these signals are summed together at the input to the phase inverter, from which point the proceedings are utterly and entirely mono.

All of that, of course, renders the dual-OT thing a bit puzzling. Marshall used two 50-watt OTs in its circa-’65 JTM45/100 to step up to a 100-watt output, but that was done quite differently, and really just as an explorative stepping-stone to doing it properly in an age when the archetypal 100-watters was a relatively new format. In this Montgomery Ward head, given the cathode biasing and relatively low supply voltages, the independently wired outputs deliver 20 watts each, at best, or can be modified into a summed output of 40, give or take. Budget-grade 40-watt transformers were commonly available, so why the two smaller OTs?

It’s difficult to say, but given these were largely constructed of Valco’s fire-sale remnants, there’s a good chance the makers simply had a box full of 20-watt OTs and needed to configure them to give the appearance of a bigger, more-powerful amp – one that could boast the USP of independent “stereo-style” speaker outputs, too.

Terry Dobbs notes that the only thing truly “stereo” about this amp “…is the stock output jacks, requiring a special stereo speaker cable to get a load on both output transformers. I’ve repaired some post-Valco amps with a blown output transformer from someone using a regular speaker cord.”

Otherwise, internal construction is also very typically Valco, with a bevy of carbon-composition resistors and mostly smaller ceramic coupling capacitors arranged across rows of terminal strips, in a rather odd hand-wired arrangement that runs perpendicular to that of most guitar-amp circuits. All told, it’s a build style responsible for that slightly gritty, graunchy tone that has endeared Valco creations to so many players. And even when you’re not playing, hey, that triple-paned light-up peak above the control panel is rather nifty.

“These are pretty darn good-sounding amps, in my opinion,” Dobbs said. We couldn’t agree more, odd though they may be.