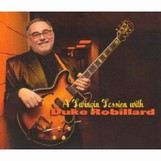 Duke continues his impressive output with a nod to his swing roots. Among guitarists, Robillard is known as a do-all, as he can be at home in almost any musical style, not only mimicking lines and copping phrases from the best of the genre, but adding deft touches to the finished product.

His knowledge of musical history is deep, and here he touches on music from such disparate sources as Irving Berlin and Ray Charles while delivering a stew of swing-era tunes that snap and pop and still have room for solo improvisation.

This disc is listenable for two big reasons; the supporting cast has been playing with Robillard for years and is made up of capable, fine performers in their own right. Many lead their own bands. Second, everyone is having fun, and it’s palpable in the recording. The horns are pushed up front and they zing, while the keyboards are floating and soaring.

Duke gives the other musicians their space, allowing them ample solo time and keeping his own lead lines brisk and tight. He’s playing a Gibson Tal Farlow on most of the tracks, and an old Gibson L-7 with floating pickup on the others. The sound is smooth and mellow, which can be said for many of the cuts, though there are also a couple with Duke’s patented jump-swing approach. While most of these are covers, Duke’s originals stand with the best of what’s here, which is part of what makes his music so unique. – Eric C. Shoaf

Drive By Truckers – The Dirty South