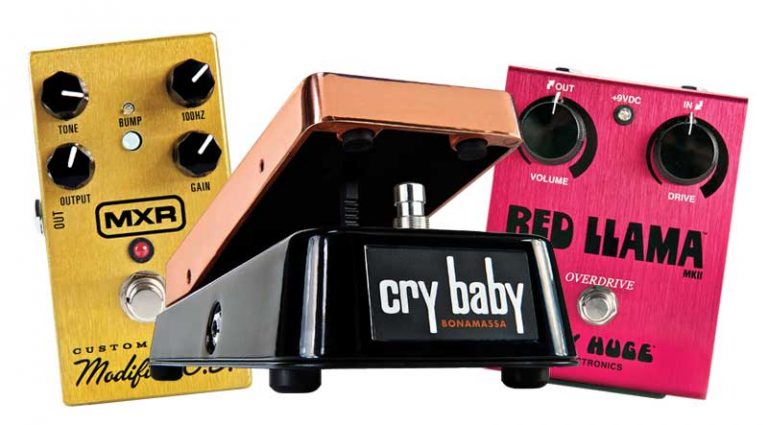 The latest from Dunlop includes a pair of overdrives and a fresh addition to the venerable Cry Baby wah family.

The Custom Badass Modified O.D., latest addition to the MXR family of overdrives, offers multiple options for users to tweak their overdrive sound without overwhelming them with a mess of knobs and switches. The pedal has a tidy layout that’s aesthetically pleasing and easy to use. The Badass is equipped with four knobs – Tone, Output, Gain, and 100hz (the latter allows for a scoop or boost of mid-frequency tones). Its Bump button activates an alternate EQ that boosts low and middle frequencies.

The Way Huge Red Llama MKII is an update on the famed Red Llama from the ’90s, an overdrive notable for its tube-amp-like sound and responsiveness to picking dynamics. Don’t let the seeming simplicity of the pedal’s exterior fool you – most of the magic happens under the hood. The pedal’s circuitry is designed to model the tweed amps of yore and replicate its ferocity and volume. The Red Llama has controls for Volume and Drive, in/out, and power supply jacks, and an easy-access battery compartment on its bottom.
The Cry Baby Joe Bonamassa Signature wah takes many of the desirable features of vintage wah pedals and incorporates modern improvements such as an output buffer and a true-bypass/non true-bypass switch (accessed via the bottom plate).

We tested the pedals using a Fender Jeff Beck Stratocaster and a tube combo set to predominantly clean tones. The Badass Modified O.D. performed admirably. Its overdrive is highly nuanced, but still packs punch. The 100hz knob gives the pedal real versatility, and we particularly enjoyed the Bump function, which adds girth and makes the box great for power-chord riffing and stoner-metal tones. The pedal really comes to life when the Gain knob is dimed. Overall, the Custom Badass Modified O.D. is a fine buy for guitarists looking for an easy-to-use, flexible pedal.

The Way Huge Red Llama is surprisingly dynamic. Even at its highest gain settings, it remains fairly clean with a light pick attack. Highly responsive, the pedal’s overdriven sounds are excellent and harken to the straight-up era of rock music. It packs a lot of volume, which is great for driving even the cleanest amps into distortion. Overall, the pedal provides a range of tones that lean toward tweed – gritty, loud, and even a little rude. It’s not designed to get super heavy, but it’s a hip plug-and-play unit.

The Bonamassa Cry Baby is also highly versatile, with a surprisingly wide sweep that can be useful for everything from funk to lead, to slow sweeps that add texture to arpeggiated passages. It also sounds great in mid-cocked position, which boosts the middle frequencies for leads.

The folks at Dunlop continue to offer pedals that are quite good, and useful for guitarists of all stripes.