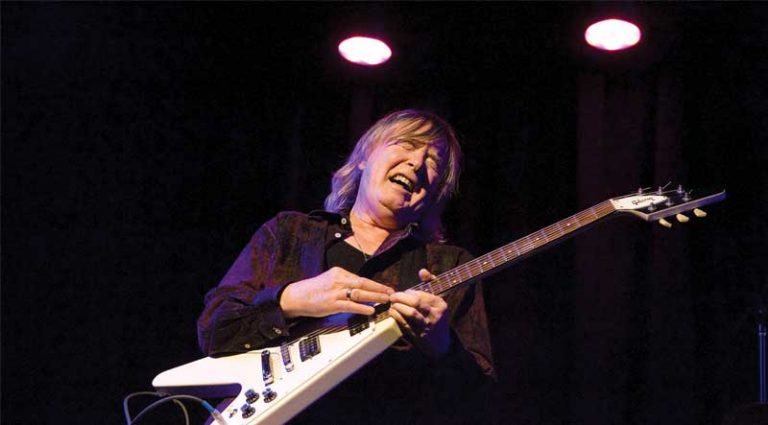 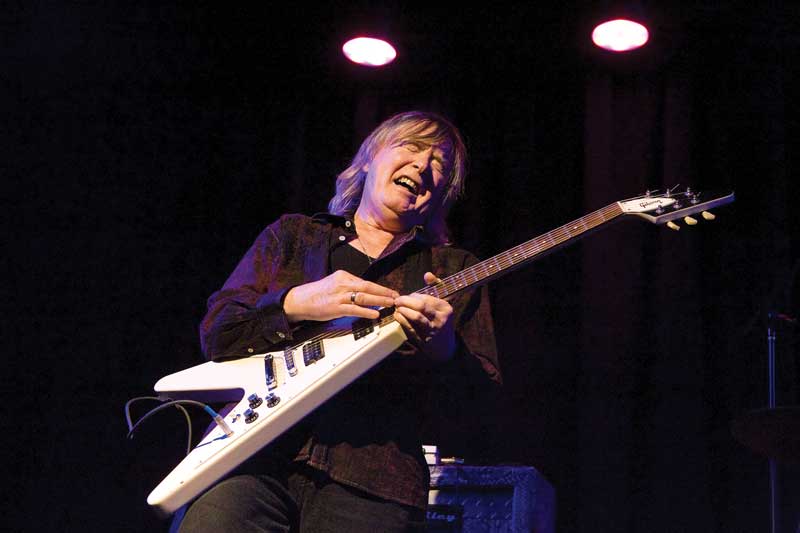 Now in its 46th year, the Savoy Brown band, fronted by founder/lead guitarist Kim Simmonds, has returned to its blues-and-boogie roots following a foray as a power trio in which Simmonds served as lead vocalist. The band’s latest album, Voodoo Moon, includes new lead vocalist/violinist Joe Whiting, along with two other new members, bassist Pat DeSalvo and drummer Garnett Grimm.

“It was physically exhausting for me, touring as a three-piece all the time,” Simmonds recently told VG. “So I asked Joe to sing to allow myself to concentrate on guitar, lessen my load, and have a world-class vocalist onboard. Once he was in the band, it gave me a different focus, and I started writing songs for Voodoo Moon.”

The new album has nine songs, all composed by Simmonds, who also wrote lyrics for six of them; Whiting wrote lyrics for two. “I feel that helped the album tremendously,” said Simmonds. There’s one instrumental. Dealing with new members can affect arrangements, but Simmonds said the task went smoothly.

“I usually arrange the songs in rehearsals with the band, and with their input,” he said. “Garnet Grimm and Pat DeSalvo had worked with me on my solo recordings, so we knew each other, and it was easy to work with them through the whole process.”

The album harkens to the band’s blues/rock roots, but one track, “Natural Man,” actually takes a sardonic look at blues songs – “I ain’t runnin’ with the devil, I ain’t bad to the bone…” as well as mojo blues items like “(High) John the Conqueroo.”
“There are so many blues songs where the singer takes a macho pose, I thought it would be nice to take the opposite approach,” he explained. “I don’t think it’s been done before… very little, if at all.”

“Too Much Money” interpolates a down-in-the-mix (but still noticeable) acoustic guitar covering the rhythm part, and he said the song almost didn’t make the cut. “With a lot of the songs on Voodoo Moon, it took hard work to find the correct approach,” Simmonds recalled. “‘Too Much Money’ was a little on the fence in terms of being a winner or not, and the acoustic guitar was just an underlay, until we took everything else off and realized that the acoustic bed track was all the song needed to make it work.”

For decades, the guitarist has been noted for his slide work, and “She’s Got the Heat” lets him demonstrate his prowess on the new album.

“I played the Ibanez Destroyer II in open E tuning,” he detailed. “I have ’50s Gibson Patent-Applied-For pickups in the guitar, and that makes all the difference!”

Simmonds took lead vocals on two songs, “Look At The Sun” and “Round And Round.” 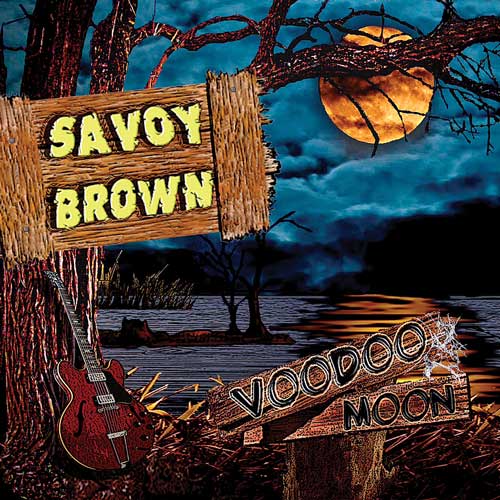 “I wasn’t really intending to sing,” he explained. “But people liked my singing on the demos – I make demos of all the songs first, with a drum machine – so it seemed natural to put a couple of my vocals on to round off the album.”

While he generally writes lyrics for his self-penned songs, followed by the music, Simmonds said the instrumental “24/7” was, “Music I had, but couldn’t find a lyric to suit. Voila, an instrumental!”

The Savoy Brown founder is pleased with the release from the latest incarnation of the band, particularly since it involved a shift in musical direction, albeit to music that has worked best for Simmonds and associates.

“It was hard work, making the album. And it’s very gratifying to see such great response,” he said. “If it is a success, I have to put it down to the people I am working with… They give me a wonderful foundation to realize my ideas.”

In addition to helming Savoy Brown, Simmonds still has his acclaimed solo career to contend with, as well.

“I’m working on the next solo album,” he said. “My producer, Greg Spencer, wants it to be an electric instrumental release. I’ve made some nice demos, but who knows? I’ve made my solo career all acoustic in the past, and I think I want to continue in that vein so as to have a completely different approach than with the band.”
For the time being, however, there’s an ambitious schedule of touring lined up for Savoy Brown to promote Voodoo Moon.

“We’ll tour the U.S. throughout 2012,” Simmonds noted. “We’ll do a tour of the U.K., Germany, and Switzerland in the spring, then tour Italy in late spring. We have a Polish blues festival and are looking at gigs in Czechoslovakia. Back in the U.S., I then play solo electric with Hippiefest in the summer with Johnny Winter, Edgar Winter, Leslie West, and Rick Derringer. I then take the band back to tour West Coast in the fall. In December, we’ll be back on the East Coast – Long Island, New York, Pennsylvania, etc. We need to do a DVD – fans keep asking for that – and we have two options to record one this year.”