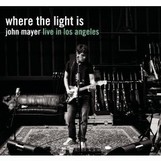 Beyond the tabloids, “TMZ,” and his celebrity girlfriends, John Mayer is a songwriter, guitarist, and vocalist who ranks among the best in modern pop. And this disc shows all of his strengths.

Kicking things off with an acoustic set, Mayer does a jazzy “Neon” solo with a great vocal and funky playing that fully display his prowess on guitar. Robbie McIntosh joins him on slide for a beautiful take on his hit “Daughters,” and he closes the set with a nice take on Tom Petty’s “Free Fallin’.”

After those first five songs, Mayer brings out Steve Jordan (drums) and Pino Palladino (bass), and the John Mayer Trio then rips through a set of blues, rock, and soul that includes two Hendrix covers, a stompin’ version of “Everyday I Have the Blues,” his soul/pop masterpiece “Vultures,” with slinky guitar, great vocals, and a lot of soul. “Out of My Mind” is a slow blues that lets all three show their chemistry and chops. After the trio plays eight songs, Mayer’s complete band hits the stage to play his hits, including “Waiting on the World to Change,” “Why Georgia,” and “Gravity.” He finishes with the R&B ballad “I’m Gonna Find Another You,” for which he ditches the Strat and grabs a Gibson L-5.

Nice bonuses on the DVD include talking segments not on the CD, and a look at his guitar collection.