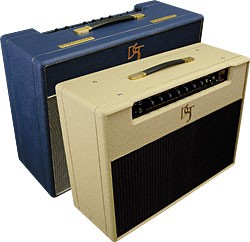 Bob Dettorre and Jeff Swanson are longtime gearheads who played in bands starting when they were just kids. As adults, one went to college and worked a “real” job, while the other tackled life as a working musician. A couple years ago, they established Dettorre/Swanson Thermionics (DST) Engineering.

Dettorre, the son of a TV/stereo repairman, built his first guitar amp from a kit, and through high school fixed gear for his friends. His interest carried over to college, where he earned degrees in electrical engineering before earning a living as an engineer.

Swanson was a childhood tinkerer, as well, who built a cabinet for his bass rig (complete with a 15″ Radio Shack speaker) when he was just 12 years old. Later, he and his bandmates in the Buzz Brothers out of necessity became self-sufficient amp repairmen. 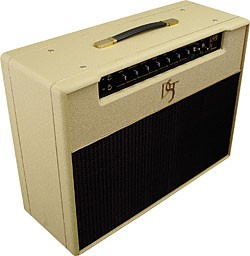 Today, Dettorre and Swanson build amps that relay a vintage vibe with unique touches. They recently offered us a look at their MarWatt and UV6 models, both of which employ all-tube circuits, hand-wired construction, and solid-core Baltic birch plywood cabinets. Both of our test amps were in 2×12″ combo configurations, and both are also available in head/cab configurations.

The MarWatt produces 18 watts output using three 12AX7 preamp tubes, two EL84 output tubes, and a EZ81 rectifier. The amp has two channels, the first based on the legendary mid-’60s Marshall JTM circuit, including the JTM’s tremolo circuit. This channel has just two controls – Volume and Tone – with Hi and Low inputs. The second channel is based on the preamp in late-’60s Hiwatt amplifiers and has controls for Bass, Middle, Treble, and Gain.

The UV6 produces 22 watts using 12AX7s in its preamp, two 6V6 output tubes, and a GZ34 rectifier. And in a twist that distinguishes it from most other amps of its ilk, it also can use 6L6GC or EL34 tubes without the need for re-biasing. 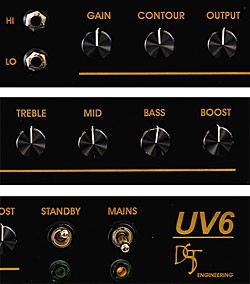 The UV6 is a single-channel amp with controls for Gain, Contour, Output, Treble, Mid, Bass, and Boost. It’s also impedence-variable using a toggle switch on the back panel.

We tested the DSTs using an early-’70s Fender Stratocaster with stock pickups and a ’79 Ibanez Artist with aftermarket humbuckers.

We got rolling by plugging the Ibanez into the MarWatt’s second channel, which with very little tweaking produced a gorgeous sound that was balanced across the range of frequencies, with fantastic note separation, meaty low-end, and nice high-end sparkle. As we pushed it to a bluesy-sounding breakup, it fattened up without losing any of its sparkle.

We then pushed the high gain, which gave us that renowned EL84 crunch, but with noteably better low-end response than we’ve heard on similar vintage-inspired amps. We got a lot of smooth gain that remained tight and focused. 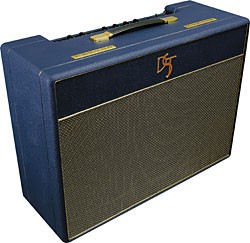 Plugging into the first channel (the one with the Marshall-based preamp) set to clean, we got tones that as a whole were not quite as full or bright as the second channel, but were stronger in the midrange frequencies. High-end response was still very pleasing and smooth, and pushing the volume helped the amp produce plenty of British crunch. Overall, the sound from this channel was a well-balanced, very smooth rock tone. And again, the amp exhibited awesome touch response.

Plugging the Strat into the second channel first set to clean produced a veritable encore – a host of low-end response with sparkly highs, again very full and pure, with laudable clarity and note separation. Tinkering with the Mid control showed us many sweet spots, and pushing to higher Gain levels increased the fullness but retained incredible clarity and sparkle, even with the Treble control nearly dialed out. In channel one set to clean, low-end response was reduced, but we got great, meaty mids, and smoother highs. Pushing the Gain even higher produced much fatter (but still Strat-like) tones. 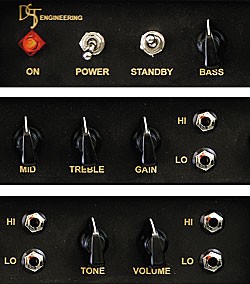 The MarWatt is an incredible-sounding amp all-around. Like a good book, it’s hard to put down… unplug… whatever.

Next up, we ran the Ibanez into the UV6 set for clean tones. The UV6 differs from the MarWatt in several ways, both cosmetic and electronic. Its control panel is front-mounted, and includes a Contour knob that lets a player shape the amp’s tone to match a guitar’s pickup ouput. It works quite nicely; we tweaked it to match the Ibanez’s humbuckers, and were rewarded with a full, fat tone with exceedingly smooth highs. It’s also instantly apparent that this amp is designd to sound more “American” than the MarWatt. Rolling the Contour back revealed a warm jazz tone, while pushing the Gain higher produced a smooth, warm blues crunch with extremely smooth highs. As we pushed the Gain higher and rolled back the Volume, the crunch faded somewhat, but never completely went away. We then pushed the Volume again, this time with the Gain dimed, and got much more crunch and so much low-end we thought the UV6 might come right out of its cabinet!

Next, we plugged in the Strat and set the amp back to clean. Tweaking the Contour quickly set the amp to help the Strat make warm, smooth, sweet highs with tight, full lows and (again) an all-around even frequency response. And it retained all of those characteristics as we drove the Gain to acceptable blues-lead levels. Manipulating the Contour let us dial in several distinct Strat voicings, and the footswitchable boost control lets a player bump the volume for solos, with a touch of extra gain and volume.