Vinny Roth’s new record, 2 Stratz are Better Than 1, is a collection of his favorite styles. “It’s kind of a resume of what I do,” he said. “I figured it never hurts when somebody might find it and it say, ‘We’re looking for a road-ready guitar vet.'”

Roth had the good fortune of recording the album at a friend’s studio during down time, which meant it cost him nothing to make. Despite that, he says, “It turned out even better than I expected. You know how it is when you go in and you’re pulling out your hair and wondering if it’s gonna be what you want. This was like, ‘Wow! I hit a home run.’ I’m very proud of it.”

Roth’s eclectic mix of funk, rock, and R&B showcases a player whose interest started when he was born in Queens, New York. “I started with piano, and you’re supposed to hate it, which I did. Then I remember watching an old Elvis movie when he played guitar and walked off with Ann Margaret. I thought ‘Man, that’s rock and roll!’ So I got a guitar and started taking lessons.”

Those lessons lasted from the age of nine until he was 18. By then, his family had moved to Virginia and he went to college to study music. “I got a music degree. Everyone else I know has a computer degree and is making money. But, hey, at least I love my job!”

Despite the college education, Roth says he has actually learned the most from just jamming with other players, and is a big fan of live music in general. “Still, to this day, the people I’m lucky enough to jam with, I learn from. My first real teacher was a hippie guy named Rick, and he always told me to jam, improvise, and listen to the Allman Brothers!” (laughs)

That love of live music translated to many of his favorite players while he was learning, and he still expresses an affinity for Cream-era Clapton and the Hendrix Band of Gypsies material. “I went through phases like the funk thing where I listened a lot to the Meters, who I still listen to. It was weird, when everybody was doing the shred-metal stuff, it just never did anything for me, because a lot of it to me just sounded like Porky Pig reciting the Gettysburg Address, you know? I mean I respect those guys, but I just went into more funky areas. I’d go into the local music store and a guy would be ripping 32nd notes or whatever and I’d just pick up a clean Strat and go ‘chink, chink, chink’ and that said more to me than 15 million notes. I also went a little to the fusion side with the Return to Forever stuff, especially the Bill Connors material.”

These days, the old stuff still gets a lot of play on his stereos, but he also likes New York’s Soulive, who specialize in jazzy funk. Like many other players, he also enjoys what John Mayer is doing. “I think he really does some brilliant stuff on guitar and writing-wise, and it’s really not fair that he can sing that well, too.” 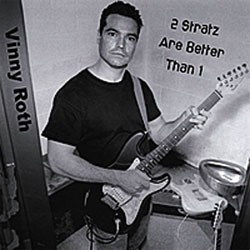 Roth’s main guitars, as the title of the disc says, are Fender Strats. “My main one, which I’ve named Dolly May, is a mid-’80s American Standard. It’s all stock and has the most beautiful clean/out-of-phase sound. It’s what I call a Wednesday guitar – they built it on Wednesday when they weren’t in a Monday mood or in a hurry to get out of the factory on a Friday afternoon. My other one’s a mid-’90s Strat Plus with a Duncan Pearly Gates in the bridge and two Fender Texas Specials. I use it for a lot of soloing, just for the humbucker and the thickness of the sound.” Two other guitars make an appearance on the disc – a Gibson ES-335 for slide parts and a Jay Turser Resolectric. “It’s a solidbody resonator with a Firebird pickup. It gives a really nice, warm dobro sound.”

Most of the sounds on the record come out of a Fender Cyber-Twin. “It had some nice presets we doctored a little. I also used a Traynor Yorkville amp that kind of reminds me of my old Fender Twin, but it’s a lot lighter and more reliable. It has Celestion 80 speakers and its clean tone is just beautiful.”

Asked about effects, Roth confesses to being a self-described “dinosaur.” His pedals are an Ibanez TS-808, MXR Distortion 3, a Boss Chorus, a Boss Digital Delay, and a Crybaby wah.

Roth has taught guitar for more than 20 years, and today teaches about 40 students. More and more today, his younger students are being inspired by what he and other members of his generation initially see as an odd source. “I like the Guitar Hero video game a lot because so many kids are getting turned on to some good old guitar music through it. They’ll come in for their lesson and say, ‘Have you heard this tune by a band called Kansas?’ And yes, they do figure out after a while it’s a lot tougher to play a real guitar, but the game has brought the guitar and guitar music to the attention of a lot of kids.”

As he prepares to become more active gigging musician, Roth will scale back his teaching efforts. Thus the CD, which he hopes to release as sort of personal ad for himself. “I’m hoping someone might hear the disc and will want me to play guitar for them,” he said.


This article originally appeared in VG‘s July 2008 issue. All copyrights are by the author and Vintage Guitar magazine. Unauthorized replication or use is strictly prohibited.
Vinny Roth