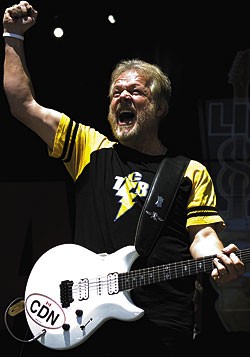 For all of his decades of experience, guitarist Randy Bachman shows no signs of slowing down.

One ongoing facet of the career of the legendary former member of the Guess Who and Bachman-Turner Overdrive includes the marketing of recordings by the late guitarist Lenny Breau, who in the late 1950s expanded the musical perspective of a teenaged Bachman by teaching him riffs by Chet Atkins and Merle Travis.

For years, Bachman has been sifting through hundreds of hours of Breau performances on tape, touching them up, and releasing them on his Guitarchives label.

“After Lenny was killed, I tried to find his stuff on CD, and nobody had it,” Bachman said. “I tried to work a deal with his record company, but I think we’ve got better Lenny than what’s on his [studio] albums because he was better live than he was in the studio.”

Bachman’s two most recent Breau releases are an anthology CD, Mosaic, and a DVD, Master Class. Mosaic includes several collaborative efforts with guitarist Phil Upchurch that were probably the last recordings from Breau.

“I’ve been collecting German archtops, and Roger Rossmeisl was a German builder who worked at Mosrite, Rickenbacker, and Fender,” Bachman said. “I’d also seen a picture of Phil Upchurch playing a Fender LTD, we connected, and I asked him about another picture I’d seen of him playing with Lenny Breau. He still had the old four-track tapes, and they sounded fantastic, but there wasn’t enough for an album. So I put those with some other recordings from different times.”

Decades ago, Chet Atkins served as a mentor to Breau, and Mosaic contains a rendition of “Georgia on My Mind” that was recorded in Nashville and includes dialogue between Atkins and Breau. Breau reportedly recorded the track using a Framus 12-string strung with just six. Bachman says the Framus – strung with more than six strings, but possibly not as many as 12 and tuned to sound like a sitar – was also used on “Lenny’s Ragadelic Dream,” an unusual “fragment” from 1968 that also appears on Mosaic.

Other tracks include “Autumn Leaves,” a sample from a previous Guitarchives release, and “Blues for Carole,” from the collection of recordings that begat the Pickin’ Cotten album. There’s even a recording of Breau’s voice on a telephone answering machine.

Bachman is also proud of the Master Class DVD. Believed to be the last known film of Breau, who was murdered in Los Angeles not long after a guitar builder delivered a new instrument to him, and made a primitive instructional video of Breau with his new guitar.

“(Luthier) Kirk Sand brought him a new seven-string,” Bachman detailed. “And Kirk videotaped Lenny teaching a master class with an old camera; he was at the University of Southern California. It’s crude – a one-camera shoot, but because of modern technology, I was able to clean it up and release it.”

Bachman has been touring and recording with Burton Cummings, and he participated in the Live 8 series of concerts, performing at the Toronto venue. He also contributed a cover of “Runaway,” from his anthology album, to an upcoming Del Shannon memorial tribute album. Another recent recording venture for Bachman included participation in a jazz album with the New Guitar Summit (Duke Robillard, Jay Geils, and Gerry Beaudoin)

These days, Randy is a fan of his chambered Gibson Les Paul 1957 goldtop reissue, acquired in 2006.

“During a soundcheck at Molsons Amphitheater in Toronto, the Gibson rep walked in with the goldtop 10 minutes before we finished. I put it on and played a few songs, and I knew I’d found my sound again. I played it that night and I’ve been playing it ever since.”

So, Bachman is constantly on the go, musically, and he will continue to strive to put out recordings by Lenny Breau.

“I’m a fan of his,” he summarized. “You know how when somebody passes away – it could be your father or your brother – and you never really told them you loved them, and then they’re gone? I never had a chance to tell Lenny ‘Thank you!’ for teaching me what to play and what not to play, how to let my music breathe, and how to make it singable. So this is my thank you to him.”


This article originally appeared in VG‘s September 2007 issue. All copyrights are by the author and Vintage Guitar magazine. Unauthorized replication or use is strictly prohibited.
Randy Bachman and Burton Cummings
The Guide