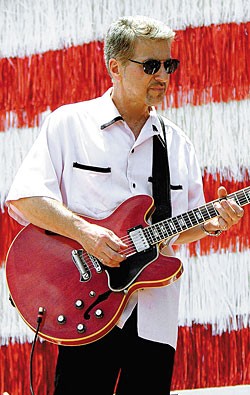 When Bob Dylan names your version of one of his songs as his favorite of the more than 25,000 covers done over the past 40-plus years, that’s pretty high praise.

To date, Rivers has reached the top 40 17 times, with nine singles hitting the Top 10. The list includes hits like “Summer Rain,” “Baby I Need Your Lovin’,” and the achingly beautiful “Poor Side of Town.”

The artist born John Rastemella in New York on July 4, 1942, has had a remarkable career that started years before the public became aware of him in ’64. Rivers had been drawn to the guitar before rock and roll became a national sensation. As a boy, he was influenced by his father and uncle performing traditional songs.

“I would just sit and stare at them,” said Rivers. “And eventually, my dad bought me a $20 Stella guitar.”

The first artist to make an indelible impression on Rivers was Elvis Presley, whom the 13-year old witnessed performing at the local high school in Baton Rouge, Louisiana.

“My buddy and I decided we’d catch this country music show, and in the middle (comedienne) Minnie Pearl, who was the host, says, ‘And here’s this new sensation with his new song that’s creatin’ a big stir… The Hillbilly Cat, Elvis Presley.’ He comes walking onstage with Scotty (Moore) and Bill (Black), and they’re setting up Scotty’s amplifier, while he’s kind of jumping around. He was wearing a pink suit and white buck shoes, and people started laughing. He’s up there twitching around, he’s got pimples all over his face. His hair’s all greasy, and I’m thinking, ‘This is the coolest guy I’ve ever seen,'” Rivers recalls with a big laugh.

Two years later, at the age of 15, Rivers had already begun his recording and performing career. On a school Christmas vacation, he ventured to New York to stay with his aunt. At that time, the country’s most famous disc jockey, the legendary Alan Freed, had a nightly radio show broadcast over the equally legendary station, WINS, whose studios were located in Manhattan’s Columbus Circle. One evening, standing outside, shivering in the snow while waiting for Freed to make his grand entrance, the self-assured youngster approached him and said, “Mr. Freed, I have a band in Baton Rouge called the Spades, and we have a record on the radio down there.’ I just handed it to him, and he couldn’t believe it. It was like something out of an Alan Freed movie!”

Freed soon secured him a contract with Gone Records, and convinced the teenager to change his name to Johnny Rivers. Nothing much happened in terms of chart success, but Rivers continued performing, using his 1957 Stratocaster.

“I wasn’t much of a lead guitarist then,” he admits. “And the Strat wasn’t really a good rhythm guitar. It was better for things like blues.” 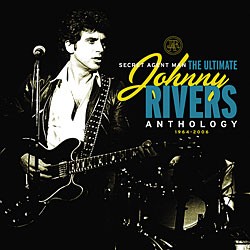 One day, Rivers was walking down Manhattan’s Canal Street, when he spotted a shiny red Gibson ES-335 in a music store’s window. He went in and had the store owner hook it up. “I loved its big, fat rhythm sound with the humbucking pickups.”

Too short on cash to purchase it, he discovered the proprietor was willing to swap it for $50… and his Stratocaster.

While the red Gibson has been Rivers’ trademark, he laments with a laugh. “Little did I know then that model Strat would become one of the most collectible guitars in the world.”

Rivers spent another five years recording for various labels, cutting $25 demos for singers like Presley and Rick Nelson. However, it wasn’t until late ’63 that he started attracting a following, playing at an L.A. restaurant called Gazzari’s. At the time, Rivers was backed only by a drummer, and he began seeking a bass player. An acquaintance told him, “We know this one guy who’s a disc jockey, but he also plays a pretty good bass.’ A few days later, this guy comes in, and we ran through some songs.”

On the night they were supposed to debut, the bassist came in after they had already finished their first set. “I fired him on the spot. Years later, he put this group together – Sly and The Family Stone!” recalls Rivers, with a big chuckle.

The bass slot was filled by Joe Osborne. However, despite attracting big crowds that included Hollywood luminaries, Rivers was becoming disillusioned by his meager $150 a week salary. He soon switched to the more profitable Whiskey A Go Go. Producer Bones Howe recorded six shows there, and Rivers soon hit the charts with a revamped version of Chuck Berry’s “Memphis.”

“I made some really great records after that, but I didn’t have the proper machine behind them,” he says. “So I struggled along and put stuff out on my own label, Soul City, with independent distribution. It was really tough.”

Rivers turns 65 this year, but don’t expect the still-very-in-demand performer to even consider cutting down his work schedule. “I try to take care of my health,” says Rivers, who doesn’t look that much different than in his heyday four decades ago. “I don’t do drugs. I drink very little, and I run two to three miles every day to keep my weight down. I try to lift weights three times a week, nothing radical, but just enough to stay in shape.”

And to keep his guitar chops finely tuned, Rivers practices at home with an Epiphone Emperor Joe Pass model. He explains. “The neck is a lot fatter than my 335, so it gives me a little workout to keep my fingers from cramping up onstage. There’s a lot of playing to do when you’re doing rhythm and lead on everything.”


This article originally appeared in VG‘s March 2007 issue. All copyrights are by the author and Vintage Guitar magazine. Unauthorized replication or use is strictly prohibited.
Johnny Rivers – Secret Agent Man