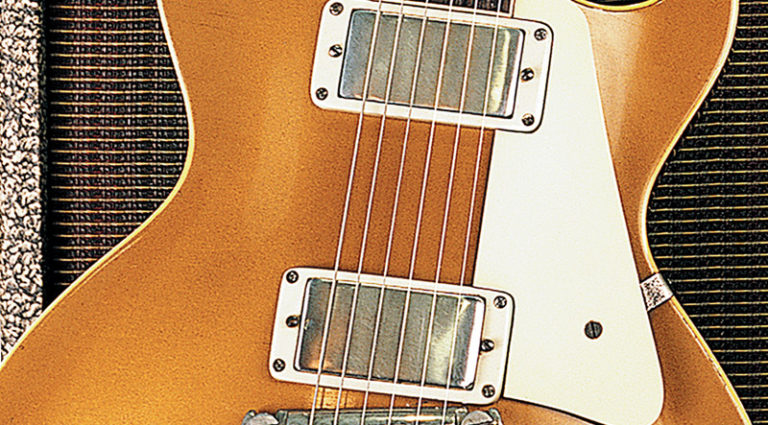 Gibson and Fender may be the longstanding heavyweight rivals of the electric guitar game, but they have one very important thing in common: they revolutionized the guitar industry.

Fender took a monumental step with the introduction of the first commercially successful solidbody guitar in 1950. Gibson reacted by introducing the Gibson Les Paul Model solidbody. As first-rate as the Les Paul was, it was merely a response to Fender’s Telecaster, and for the most part devoid of cutting-edge innovation.

But innovation did rear its head when Gibson introduced the first commercially successful humbucker. Introduced in 1955 and patented in ’59, the Gibson humbucking pickup changed the world of popular music and the electric guitar.

At the time, Leo Fender was content with his single-coil pickup, mostly because it had the tone he was striving for. Likewise, Gibson was not displeased with the sound of it single-coil P-90. What displeased the sales staff at Gibson (who heard direct complaints from players) was the P-90’s irritating hum!

The motivation for the humbucking pickup came from Maurice Berlin, owner of Chicago Musical Instruments (CMI), Gibson’s parent company. During weekly meetings with Berlin, CMI V.P. Marc Carlucci and president Ted McCarty told Berlin about the dissatisfaction with the noisy P-90. Carlucci heard about it from the Chicago sales staff, while McCarty heard from the celebrity clients who would visit Gibson headquarters in Kalamazoo.

They all knew something had to be done. A solution to the problem became the responsbility of Gibson’s electronic lab supervisor, Walter Fuller and Fuller’s assistant, Seth Lover.

At Gibson, all things electric went through Fuller. His father was a janitor at Gibson, and may well have been responsible for getting his son hired at Gibson. Fuller joined the machine shop at Gibson in May, 1933, but was quickly promoted to cost estimator/time keeper. In ’35 he was promoted to electrical engineer, where he pioneered some of Gibson’s earliest electric guitars. His work generated five patents in his name and, during World War II, he supervised the company’s military electrical assembly subcontracts.

In 1941, Fuller asked Seth Lover to join Gibson as an amplifier troubleshooter. Through circa 1955, it was common practice for a Gibson foreman to hire workers for his own department.

Kalamazoo-born Lover began experimenting with radio technology shortly after the commercial introduction of the radio in the early 1920s. By the mid ’30s, he was building amps for local musicians. He joined Gibson in ’41.

With the outbreak of World War II, Lover joined the Navy. After the war, he returned to Gibson for a few years before re-enlisting in the Navy.

By ’52, Gibson needed Lover’s skills more than ever. The era of the electric guitar was blossoming, and Gibson was developing its new Gibson Amp (GA) series. McCarty upped the ante, making an offer Lover couldn’t refuse.

When Lover returned, Gibson had a new electronics lab. It was there that Fuller and Lover developed the first humbucking pickup (for more details, see accompanying interview with Lover).

When Lover started working on his humbucker, the idea to eliminate noise was not entirely new. A vaguely similar design dated to the 1930s, when he and Gibson applied for three patents. The term “humbucking” was not part of those applications, because Lover invented the term later in the process. Interestingly, two of the old patents required direct-current power! Not a good idea.

Another factor that worked against earlier hum-canceling pickup design was noisy amplifiers. Listening to a ’30s guitar and amp, you might not be able to distinguish single-coil hum, field-coil speaker hum, or miscellaneous amplifier hum. Lover’s experience with radios gave him the background that would prove invaluable in the humbucker assignment. Plus, his early work with amps included the study of a humbucking choke-coil for an amplifier. Lover knew the P-90’s problem was its sensitivity to external energy; a problem exaggerated by the amplifier. Part of the problem was generated by the amp itself in the form of 60-cycle hum from the power transformers.

Lover’s experiments led him to double-coil pickup construction such that the interference induced by external sources could be cancelled while the signals generated from the vibrating strings were retained. Lover designed a pickup with two single-coils combined into one. The coils were reverse-wound so the hum from the first coil cancelled the hum from the second. Lover also opted for two single-coil bobbins, wired in series, hence producing a more powerful signal for the amplifier’s use.

Lover initially pursued three humbucking designs, but chose the one that allowed for efficient assembly. His option was the most successful for maintaining the required high and low frequencies, thus providing consistent performance.

Lover’s invention was not so much groundbreaking, technologically, but rather a specifically engineered hum-canceling device, which became known as the “patent-applied-for” pickup (P.A.F.) because of the some label on its underside.

Lover and Gibson did not have exclusive rights to “hum-canceling technology,” but they did have sole rights to the specific P.A.F. design. 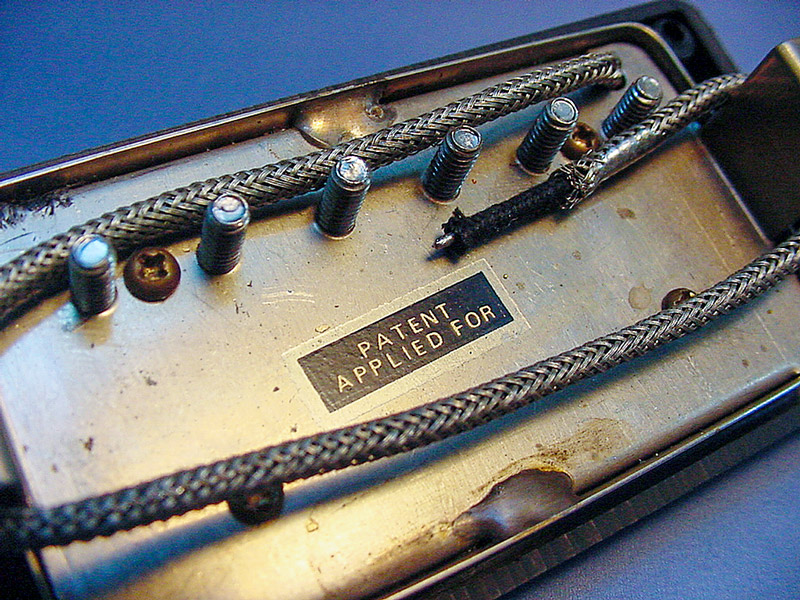 The first prototype humbucker was designed to fit into a modified plastic P-90 pickup cover. Gibson liked the sound and size of the P-90, so it was the perfect model. Hum-canceling designs of the 1930s and ’40s had a tendency for slurry response and dull tone. Gibson wanted none of that. Instead, they wanted to retain the P-90’s sound, while eliminating the hum. So, in designing and building the humbucker, Lover used as many P-90 attributes as possible, including slicing the P-90’s black bobbin in half to make dual black bobbins.

“After Seth finished [building a hum-canceling pickup], he came into my office and put [it] on my desk,” McCarty told VG in 1999. “He said, ‘Here’s the humbucker.’ The new pickup had a name!”

McCarty wanted the new unit put into a guitar right away. Given its propensity for transfering pure string vibration to the pickups, engineers opted for the purest model they had – the solidbody Les Paul.

Two more pickups built like the first were taken to the patternmaker’s bench in the basement. A guitar was pulled off the white-wood rack in the mill; an early/mid-’55 with a wraparound tailpiece. The humbucker and the P-90 were equal in length and width, but not depth. So the guitar had to have its pickup cavities deepened. After the work was accomplished, the guitar was walked to the spray booth, then mounted with hardware.

Shielding paint and foil were added to the control and toggle switch cavities. Lover also reversed the pickups so they were out of phase, further avoiding extraneous noise.

Modelmakers also had to devise a new mounting ring. The assembly was simple – a plastic trim ring, two P-90 polepieces for mounting/height-adjust screws, four trim ring mounting screws, and two lightweight springs. This engineering breakthrough, though often overlooked, first appeared on the test guitar. The design is still in use today. 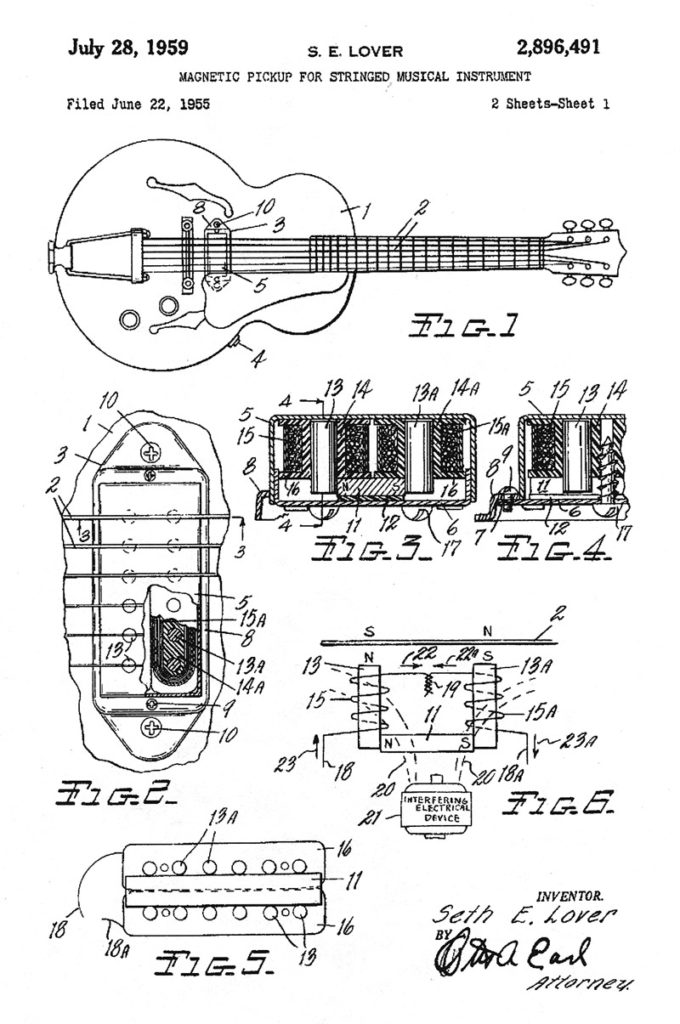 From the Seymour Duncan Archives

** The winding machine did not have an automatic shutoff or stop counter until later, which accounts for the variance in DC resistance from pickup to pickup in early PAF humbuckers.

As soon as the test guitar was ready, a meeting was held in a conference room a few steps from McCarty’s office. Gibson employee (and Columbia recording star) Rem Wall was asked to play the guitar for McCarty, Fuller, Lover, John Huis, and Julius Bellson. Two other specialists who could play were also asked to test.

“The guitar worked without any hum and was immediately approved for use,” McCarty said. “Moldings needed to be made for the windings, and stampings for German nickel-silver.”

Berlin asked McCarty to assign patent holders, and he generally let the lead designer be credited. Lover was given credit for the important features – the patent was his – and his name is now legendary in vintage guitar circles.

The patent drawing depicts a flat magnet resting beneath two bobbins, with the bobbin assembly polepieces directly touching the sides of the flat magnet. On the drawing, the first humbucker prototype, and the two test guitar pickups, polepieces are non-adjustable. 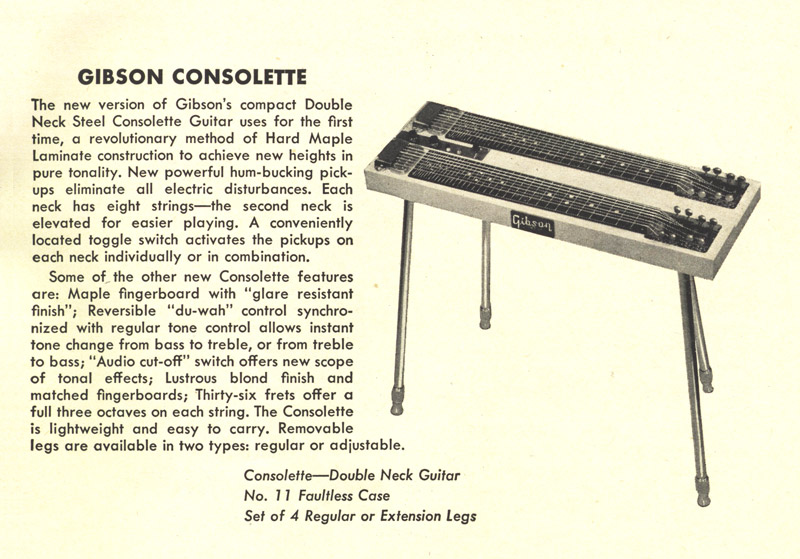 Even though 1957 is commonly considered the date of the humbucker’s introduction, it actually debuted in late ’55 on Gibson’s revised Consolette steel guitar, advertised in the catalog with “new, powerful hum-bucking pickups eliminate all electronics disturbances.”

Check out the VG PAF Shoot-Out.

This article originally appeared in VG‘s March 2005 issue. All copyrights are by the author and Vintage Guitar magazine. Unauthorized replication or use is strictly prohibited.