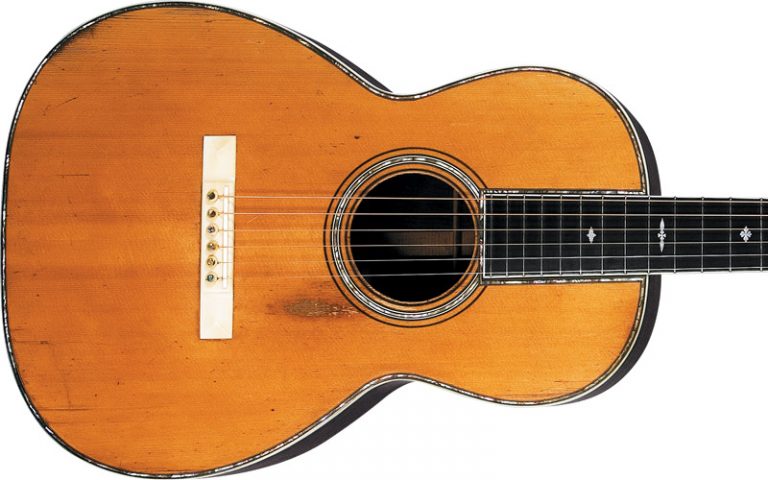 It has all the appoint-ments of a Martin 00-45, particularly the abalone pearl trim around all the borders of the body, but this guitar is entered into Martin’s books as a special-order 00-42. The reason is simple: Martin did not yet have an official Style 45 when this guitar was made in 1902.

Abalone pearl trim was nothing new on a Martin at the time, at least around the top border. Style 42 had been standardized by the late 1850s, and its abalone pearl went all the way around the fingerboard extension. The soundhole, too, featured an abalone ring (as did all of the 30-some styles). An ivory bridge with pyramid ends added a touch of elegance.

Beyond the top of the guitar, however, Style 42 was pretty plain. There was a strip of wood marquetry down the center of the back. Fingerboard inlays – initially, just three snowflakes – were a relatively recent addition introduced in the 1890s, and the headstock was unadorned except for the Martin brand-stamp on the back.

In 1902, Martin made what went down in the books as a 00-42 Special, but that term hardly describes the “presentation” level of ornamentation. The fingerboard and peghead had an intricate floral or vine-pattern inlay. The guitar also had a pickguard – which no Martin guitars of that period had – in the style of bent-top, bowl-back mandolins, with a symmetrical shape, situated under the strings. It, too, was heavily inlaid with the floral pattern. For good measure, an abalone border was added to the sides and back of the guitar.

This “pearled-out” 00-sized guitar, serial number 9372, was far too ornate to be a standard Martin catalog model, but it did start people thinking about taking Style 42 to the next level. Only 38 serial numbers later (which would be the same day today but probably two months later in ’02, a year in which Martin made only 218 guitars), Martin made another 00-42 Special (#9410), with the side and back trim but without the fancy fingerboard and pickguard inlay, and 78 guitars farther down the line, Martin made yet another – the one you see here (#9488).

Why not the larger 000 body size for these ultra-deluxe models? Again, the answer is simple. It didn’t exist yet, at least not in Martin’s standard line. The 000 was still experimental in 1902, with only five 000 examples – all designated as specials – made that year.

This guitar features the first version of the Style 45 peghead inlay, which is sometimes referred to as the “fern” pattern. Martin pictured a Style 45 guitar with this inlay in the ’04 catalog and the same photo appeared as late as the ’09 catalog, but Martin had actually begun using a simpler pattern, known today as the “torch,” by ’05, and that version lasted until about ’27. A slightly simplified torch took over, but only until the early 1930s. By that time, Martin was switching to a 14-fret neck with a solid peghead that allowed more room for a logo and/or ornamentation than the slotted pegheads, and on Style 45 guitars (even those that retained the slotted peghead) the delicate torch was replaced with the bold, all-caps, vertically oriented “CF Martin” inlay.

Style 45 got off to a slow start. It was 1919 before production of any one model hit double digits, but Style 42 models weren’t selling much better until the 1920s. In fact, it’s difficult to assess whether guitarists preferred one style over the other because the preferences vary from one body size to the next.

The initial designation – Style 42 Special – understated just how special Style 45 Martins would become. In the pre-World-War-II years, it was only surpassed briefly by the OM-45 Deluxe (produced only in 1930), which featured additional inlays in the pickguard and bridge. In today’s vintage market, Style 45s follow the same pattern as they did in their original listings. The larger the body, the greater the value. The largest of the pre-war models – the D-45 – is, of course, the Holy Grail of vintage Martins.

Although Martin has offered models in recent years with higher model numbers than Style 45, along with many limited-edition, commemorative, or artist models with fancier appointments, the Style 45 remains today as it was when this “pre-45” guitar helped get the Style 45 ball rolling in 1904 – simply Martin’s top style.