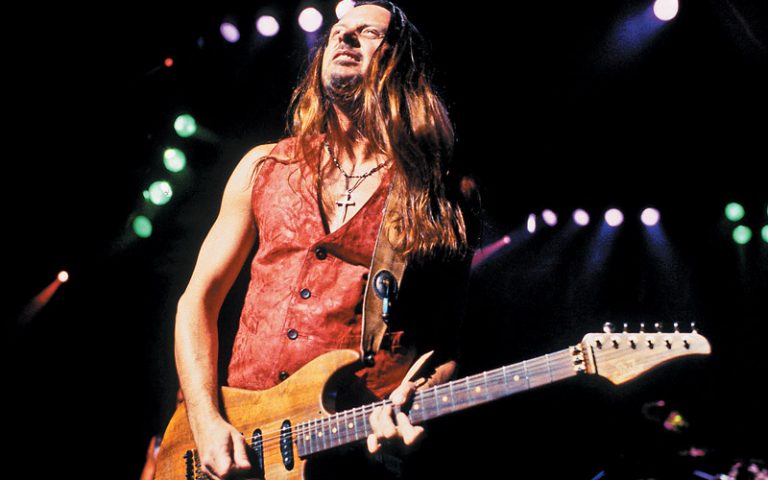 There’s no two waysabout it – thanks to MTV dunces Beavis and Butthead, Winger gets no respect. But the band knows how write killer pop-rock tunes, has one of the baddest rock-fusion drummers in Rod Morgenstern, and rock-solid bassist Kip Winger knows how to craft a great lyrical hook. And it has a new live double CD and having survived the fate of most ’80s “hair bands” it lives on. In the middle of this is studio vet Reb Beach, who lays down chunky, energetic rhythms and sizzling guitar solos. And Beach moonlights, lending his smokin’ chops to other ’80s stalwarts like Dokken, Whitesnake, and Night Ranger.

We didn’t really re-do anything after recording it. Those are the original guitars. And I’m happy the way it turned out – it’s a good representation of what the band is like live. A lot of people didn’t really know that Winger did that… and they still don’t (laughs)!

It’s the worst name in rock (laughs)! Musicians know us as good players but the consensus on Winger is ’80s pop. But we love to play, and it’s fun to watch people. At the end of the night, everyone’s happy. You see people at first standing there with their arms folded saying, “My wife dragged me to this stupid thing!” By the end they’re screaming, “Yeah!”

The live version of “Rainbow In The Rose” is very cool.

That’s Kip Winger’s baby, and it took him months to write. It’s one of my favorites. You can tell he’s that kind of musician – he studied with people from Julliard and still studies music every day. I just drink beer and play guitar! I’ll play a riff and he’ll say, “Okay, there’s your verse, now go to E, that’s going to be our bridge.” He’s really a great arranger.

What keeps you guys together despite all the cork sniffers out there?

Kip wanted to get our ya-yas out before we were too old to do it. His real love is classical music, but he likes to rock. It just seemed we should do this before we’re in our 60s. We wanted to see what the vibe is and so far it’s been shocking how people really dig it.

Is this a farewell tour?

Kip is my best friend. We talk all the time, so we’ll always be doing stuff together. He produced my album, The Mob. Of all the bands we’re in, and the different projects we do, this is our favorite. Hopefully David Coverdale won’t read this (laughs)! But it’s music we wrote, and all we do is laugh all night on the bus. It’s a really good time. It’s four really nice, fun guys. Most bands have at least one troublemaker, but this one doesn’t. It’s just drinkin’ and having fun. Whitesnake is much more professional and regimented. With Whitesnake you’re at the Ritz-Carlton in New Zealand, with Winger you’re at the Quality Inn in New Jersey (laughs)!

You filled in for Night Ranger…

Yeah, all summer. It was excellent. I learned how to play the whammy bar by listening to Brad Gilliss. If you listen to Winger, there’s all kinds of vibrato screams on there – I ripped off all that from Brad. I was totally influenced by him. And those solos were way more challenging than Whitesnake!

You played all the Jeff Watson solos note for note?

I did it the same way I had to learn George Lynch for Dokken. I do it my way. If you get to a riff that’s not your style, you make it your style. You use the same notes but with your technique. I got to play “Don’t Tell Me You Love Me” and that song just rocks with the double solos. It was really fun.

Did you have to modify your sound for Night Ranger?

My tone is perfect for Night Ranger – straight ahead rock, with some poppy songs.

The Pigtronix PolySaturator is such a good-sounding pedal. You can plug into a Fender Twin and make it sound like a Marshall. I couldn’t believe it. There’s crunch and low-end, and the EQ does a lot. Their echo pedal is phenomenally cool. – Oscar Jordan