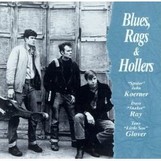 The fact that this folk-blues trio existed at all is noteworthy. By the time KR&G hit the national scene, first at the 1963 Philadelphia Folk Festival and then Newport a year later, you could count the number of white blues performers on one hand (a very young John Hammond and, at times, Dave Van Ronk come to mind). “They went out and did it,” stresses guitarist Galen Michaelson in one of this documentary’s interview segments – underscoring what is now commonplace was virtually unheard of 45 years ago, when the trio started gigging around Minneapolis.

This 1986 documentary was directed by the group’s harpist, Tony Glover, who added postscripts in ’95 and now in ’07, for this expanded, two-and-a-half-hour edition, which includes nine bonus performances from the reunited group in the ’90s.

Glover’s nickname was “Little Sun”; acoustic guitarists John Koerner and Dave Ray (a Leadbelly-inspired 12-stringer) were “Spider John” and “Snaker,” respectively. Blues guys need nicknames, after all. It’s that kind of naivete that, in hindsight, makes the group so charming. It’s the same lack of self-consciousness that would allow them to sing a work song like “Linin’ Track” – something you’re not likely to see three white college kids doing today.

An early business card read, “Blues-Ragtime-Folk. Available for concerts, lectures, clubs and house parties” – “lectures” being the most telltale word – and later performances, incorporating beat poetry, revealed the intellectual bent that was always under the surface. Thankfully, they didn’t play like academics, though they approached the music from a folk-informed angle. “We were the only cats playing any blues,” says Ray. “Everybody else was into that folk music stuff.” Koerner adds, “We insisted on being funky, no matter what.”

The film chronicles the different paths the bandmates would eventually take, which included several reunions – fortunately, since the original incarnation was not captured on film until almost 20 years after they first formed. The credits point out that it was done with no grants or arts funding, which shows at times, but thank God it was made, since Ray’s death in 2002 (the youngest member, then 59) put an end to any further reunions of this seminal group.

Erin Harpe and the Delta Swingers