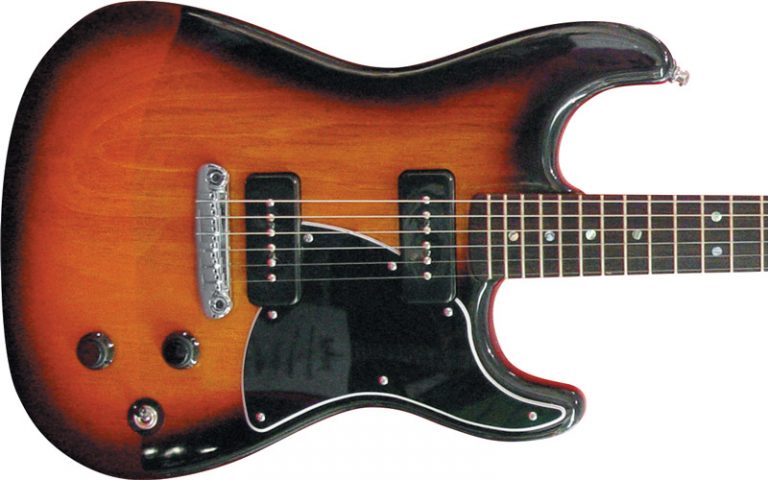 Recently launched as part of Fender’s American Special series, the Strat-o-Sonic DVI and DVII (single- and double-pickup, respectively) offer a unique twist on an old favorite. Scale length aside, the neck of the Strat-o-Sonic is pure Fender – modern polyurethane-finished C-shaped bolt-on maple with a 91/2″ radius rosewood fretboard and a larger-profile black headstock. And from outward appearances, the body is standard Fender Strat, but made of Honduran mahogany with five tone chambers and not solid alder or solid ash. The overall appearance of the Strat-o-Sonic is very pleasing and well-conceived. The brown sunburst finish over the mahogany body, along with the black headstock and plastic parts, give the guitar a real vintage look and vibe.

Fender definitely borrowed some styling concepts from Gibson when it came to the wraparound bridge, but with marked improvements from the one-size-fits-all unit on older Les Paul Specials. Fender’s new Tech-Tonic bridge is made of chrome-plated brass, and is fully adjustable – each saddle can be adjusted for height and intonation, and the tailpiece can be raised, lowered, and locked in place. Other hardware includes chrome Fender/Schaller cast/sealed tuners, Schaller straplock buttons, and a tree for the B and E strings. Arguably the most striking aesthetic element on the Strat-o-Sonic DVII we tested is the DE-9000 Blackdove single-coil pickup combination, and three-position toggle. Rounding out the list of features is a small black/white/black pickguard, abalone dot inlays on the fretboard, master volume and tone knobs, and Fender Super 250 (.010 to .046) strings.

The one other feature that made this “Strat” unique was that it was 243/4″ scale like a Gibson and not 251/2″ like most other Strats (yes, Fender has produced some “short-scale” Strats).

Though very reminiscent of Gibson P-90s, Blackdoves are true single-coils, not stacked humbuckers. We checked out their sound with the help of a late-’70s Fender Twin Reverb, a Line 6 POD, and a Crate V5212 tube combo.

Playability was good, right out of the case, action and string radius were set correctly, and only a slight adjustment was needed to straighten the neck. It was very apparently that the .010s were a good choice. Fender typically ships guitars with .009s, but because of the shorter scale, the strings are under less tension. So, larger strings put back some of the stiffness to which Strat players are accustomed. The guitar isn’t stiff-feeling, but rather, it feels like you’re getting a bit more “feedback” from the strings as you play – not a trace of slinky/mushy feel. And the well-set action meant the strings didn’t buzz or choke on bends. Also, the chambered body is light – especially for mahogany – and the contours felt comfortable.

From the first strum, it’s evident Fender spent time matching the pickups to this guitar. The clean tones from the Twin and the Crate were fat, like you’d expect from a P-90, but they retained a lot of the high-end shimmer often lost on overwound single-coils. The middle position (both pickups on) proved to be my favorite because of its lush, thick tone and clear note separation. It had that out-of-phase Strat sound, but with a little more low-end mids. The bridge position had a fat “Tele” kind of sound, with a little less twang, and good thump to the low-end and snap to the highs.

Using the overdrive channel of the Crate and adding the Line 6 POD, the guitar offered tones more in the Gibson P-90 neighborhood, but again with better note separation. Because the Blackdoves don’t sound as heavily wound, they sport a little less output. But if you need the higher output, chances are your amp can deliver. The combination of the chambered mahogany body and Blackdove pickups give the guitar a balanced and smooth overall sound.

The Strat-o-Sonic is available in Brown Sunburst, Crimson Transparent, and Butterscotch Blond. With great usable tones, a cool vintage vibe, and good playability, it’s a welcome twist on an industry standard. – Phil Feser