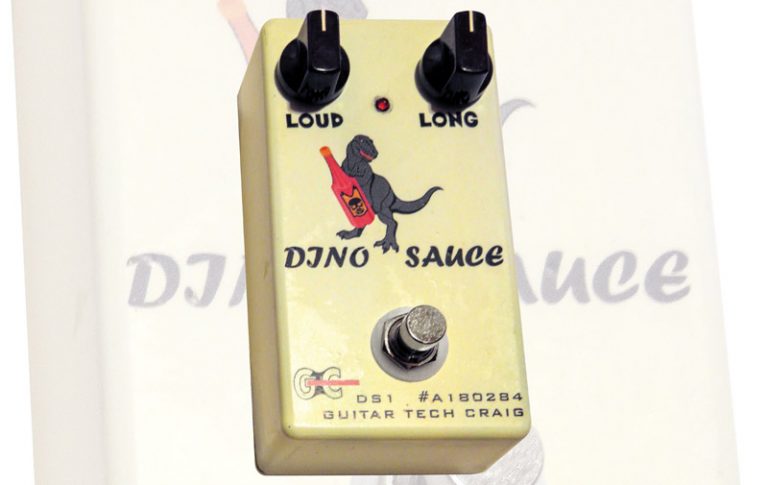 Imagine a Strat tuned to open G, a D chord being floated at the seventh fret with a Craftsman deep-well socket. What is that ethereal sweetness and sustain under Lowell George’s voice? Oh, yeah… a compressor pedal.

The Little-Feat-approved Dyna Comp and the Ross Compressor are the inspirations for Guitar Tech Craig’s Dino Sauce, which nails the sound in a simple package with modern updates like a 9-volt adaptor.

A hollow parts Tele was threaded through the Dino Sauce and an overdrive into a small combo amp for a small-room trio gig with an amplified string bass and a small jazz kit. By limiting spiky attacks from aggressive right-hand techniques, the Dino Sauce proved a welcome tool for achieving a dynamic sound at low volume, with or without overdrive.

With Loud and Long controls at 12 o’clock, the Dino Sauce’s impact was clear and clean, with a touch of compression’s sweetening effect. Some classic Tele tricks – false harmonics, Tone control wah effects, B-bender/pedal-steel imitations – flowed like water with no excessive gain. The bridge pickup, with the tone rolled off and OD kicked on, created a semi-hollow “woman tone” sustain for days, facilitating the volume-swell techniques beloved by 335 aficionados.

A humbucker-loaded jazzbox appreciated a little Dino Sauce on a solo gig. With the Long knob dimed, a synth-keys sound rounded out the chordal approach, though a less radical setting sounded natural and silky. The Loud knob was handy for quick volume adjustments when switching the pedal on, but at more aggressive gain settings, the effect tended to accent noise culprits like single-coils and old-building power fluctuations.

Hard to believe, but there was a time when two or three pedals served most electric guitarists just fine. The Dino Sauce sounds and feels like a welcome return to a warm, familiar sound from back inna day. – Chip Wilson