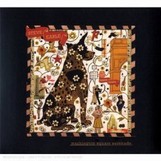 Whether or not you appreciate the politics that have dominated his latest records, it’s hard to deny that Steve Earle is a brilliant songwriter. On his latest, Earle has gone back to a folksy feel, and while the politics are still around, they aren’t nearly as heavy-handed.

Even with plenty of acoustic instrumentation propelling songs like “Tennessee Blues,” “Down Here Below,” and “Satellite Radio,” Earle manages to slip in a slight hip-hop feel with the percussion on a few cuts. A lone acoustic guitar repeats in “Come Home to Me,” spotlighting the longing and despair. “Sparkle and Shine” is as a superlative example of a love song. The acoustic solo at the end is a real gem. Steve pulls out the banjo for the drug tale, “Oxycontin Blues.” Various instruments mix well with the imagery on “Red Is the Color.” The sing-a-longs “City of Immigrants” and “Steve’s Hammer (For Pete)” are just what you’d expect – acoustic anthems, one celebrating the complexity of the American populace, and the other celebrating Pete Seeger. Lyrically, Earle is as sharp as ever. Vocally, he’s strong and assured.

Since this is an advance, I’m not sure who is playing what, but it’s all right on the money. Earle really is at the top of his game in a number of ways. The music and lyrics are focused and this one adds a fine chapter to his burgeoning songbook.