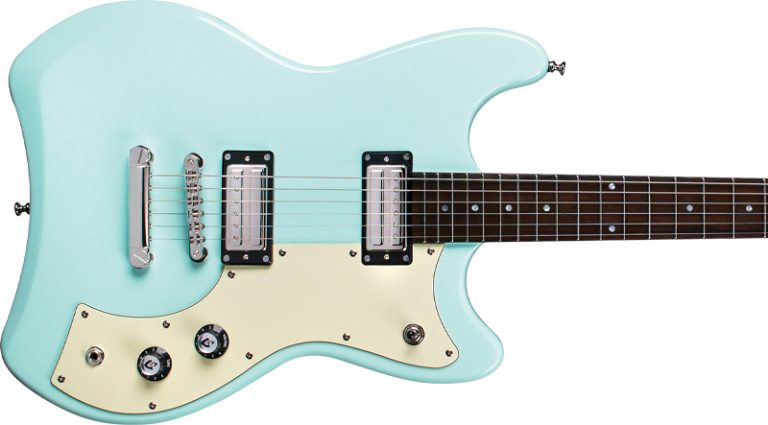 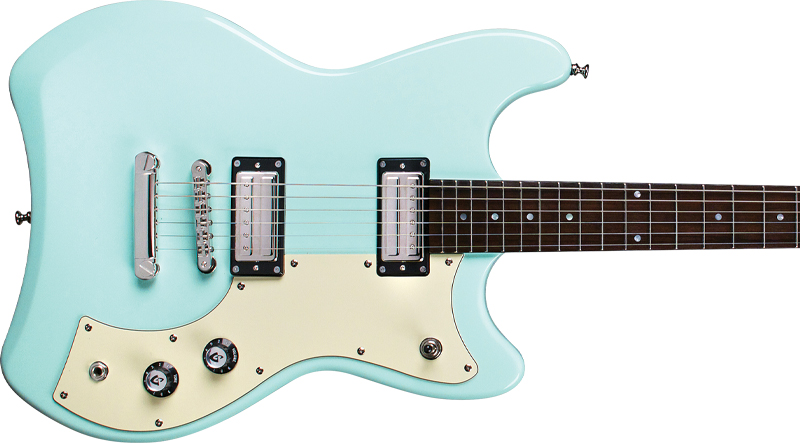 In 1964, Guild launched its original Jetstar as the company’s budget-friendly solidbody. With a more-conventional shape than the S-200 Thunderbird introduced shortly before, the Jetstar didn’t quite set the market ablaze, and thus was manufactured in limited numbers; today, original examples fetch upward of $1,700.

The early Jetstar was a single-pickup guitar and though Guild presents this new model as a reissue, it’s actually a mash-up of features more closely resembling the original Polara. Because that name is in use, though, the company settled on Jetstar.

This new Jetstar has a mahogany body, 10″ fingerboard radius, set neck with 25.5″ scale, and a nut width of 111/16″. Previous Polaras had short-scale necks, so the full scale here is an upgrade, and the body is finished in one of three polyurethane choices – Seafoam Green with white pickguard, black, or white (the latter two with tortoiseshell guard).

Guild calls the neck profile “Shallow C,” but it has a bit more beef than most modern C and shredder necks. It’s quite comfortable, with a volute to reinforce. The elegant scroll-shaped headstock, with its backward pitch and classy pearloid Guild pyramid logo, is sure to elicit opinions pro and con. The fingerboard is attractively grained pau ferro with 22 flawless narrow jumbo frets, and in-line Kluson-like tuning gears with nickel plating matching that on the tune-o-matic bridge and stop tailpiece.

From an electronics standpoint, the Jetstar sports two dual-coil Guild LB-1 Little Humbucker pickups, standard in most reissue Guilds. They accentuate high-end cut and offer trebly spank when played clean but fatten up nicely when overdriven. The Jetstar has one Volume and one Tone control and a three-way toggle to complete its simple, classic layout.

Strapped on, the Jetstar is extremely well-balanced with no neck dive. Plugged in, it delivers; chords are crisp and clear on a clean setting, and pentatonic soloing with aggressive bends and a healthy amount of overdrive are very satisfying. Plus, the Jetstar weighs in around just seven pounds, making it easy to sling through a four-hour bar gig.

While the new Jetstar may not be perfectly faithful to the original, what’s in a name? Underneath all that retro styling lurks a cool little guitar suitable to add to any arsenal.