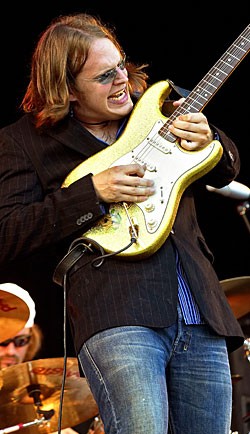 Asked whether he gets philosophical at the thought of turning 30 (his birthday was May 8), Joe Bonamassa is reluctant. Maybe because since before his 14th birthday, he has made in his way in the world by working as a musician – one who knows the importance of vintage guitars.

Born and raised in Utica, New York, Bonamassa credits his father, who owned a music store, for nurturing his appreciation.

“He was a used and vintage guy,” Bonamassa said. “So when I started playing guitar at age four, I played things like a beat up Olympic White ’60s Fender Strat, and a ’50s Martin D-28. I got used to playing the old ones, so I still don’t like the feeling of a shiny new guitar in my hands. I feel like I’m gonna scratch it or break it. I’m a lot more comfortable playing things that are worn. But now that a lot of the old ones are real valuable, that can be kinda back to square one.”

At some point, young Bonamassa’s guitar prowess earned him the nickname “Smokin’ Joe,” though today he prefers to avoid it.

“I think (boxer) Joe Frazier had a better deal,” he chuckled. “A harmonica player in upstate New York came up with it. I’d played classical guitar, as well, but kinda rebelled when I heard Eric Clapton and Peter Green. I was hooked on that kind of music from then on. So I started playing blues festivals when I was nine, and the nickname came around that time. I never really adopted it because I didn’t want to be known as a ‘nickname’ player, especially when I started solo projects. It’s true that for a while, some people didn’t know who I was without hearing the nickname, but getting rid of it made a lot of sense.”

Bonamassa has had numerous associations with older-generation players such as Buddy Guy, Stephen Stills, Robert Cray, Danny Gatton, and especially B.B. King, having opened for the King of the Blues at the age of 12. And he has continued to tour with King over the years.

Asked why his experiences with such legends have been so positive, Bonamassa chuckled, “I listened to old records… I should have been born in 1950. I’m into old guitars, I’ve owned an old car, and for a large portion of my life, I didn’t listen to anything that was made after 1974. When I met all of those guys, they liked the fact that I could kinda talk the language in the sense that I knew a lot of the ins and outs of older recordings. And to be honest, a lot of the people I’ve opened for tend to draw a bigger crowd, so I’d tempered my act to fit that type of audience.”

Bonamassa was booked to open for Stevie Ray Vaughan, but the Texas guitarist was killed in a helicopter crash two weeks prior to the engagement.

He acknowledges that his profile was raised by playing in Bloodlines, a band that included second-generation players Erin Davis (Miles’ son), Waylon Krieger (Robby’s son), and Berry Oakley, Jr. (son of the late Allman Brothers bassist).
“It definitely helped a lot,” he said. “I was signed to EMI Records when I was 13; I was discovered when B.B. King took me on tour, then a TV show called ‘Real Life with Jane Pauley’ did a 20-minute segment on me in prime time on Sunday night. But EMI didn’t know what to do with me; I didn’t sing, didn’t write. Bloodlines taught me what to do, and what not to do; if I hadn’t played as a member of that band before my solo career, we probably wouldn’t be having this conversation!”

After Bloodlines, Bonamassa began concentrating on lead vocals, which he calls “the biggest pain-in-the-ass thing I’ve ever done in my life.

“If you’re a guitar player or bass player, and you’ve got the flu or a sore throat, you may still be able to play. But if you’re the lead singer, you don’t know how it’s going to sound, and it can be nervewracking. But I do enjoy singing, and I think it has made me a better guitar player.”

Bonamassa’s solo career had an impressive start. His initial effort, A New Day Yesterday, was produced by the legendary Tom Dowd, who Bonamassa praised as “a genius and a gentleman of the highest order.”
“He was 74 years old when I worked with him, and he was the most brilliant, unassuming guy I’ve ever met. Here’s a guy who worked on the Manhattan Project, and he’d be more than happy to tell you about how he recorded Otis Redding, or how the Cream got a certain tone. To have my first solo album produced by him was an honor; I equate the time I spent in the studio with him to getting a four-year degree. He knew everything; he’d conduct a power trio like he was conducting an orchestra.”

A New Day Yesterday initiated Bonamassa’s propensity for naming albums after cover songs; in this case, one on Jethro Tull’s second album, Stand Up. His most recent offering, 2006’s You & Me, breaks the tradition, but still includes noteworthy covers, from the opening front-porch stomp of Charlie Patton’s “High Water Everywhere” (a nod to Hurricane Katrina), to an extended version Led Zeppelin’s “Tea For One,” of which Bonamassa said, “The playing definitely has some of my Robin Trower moments and my Frank Marino moments.”

Bonamassa’s guitar collection today includes about 190 instruments, and he discussed some appropriate classic representatives of his assemblage. He doesn’t have his first guitar – a Chiquita. “I traded it in on a ’72 three-bolt, beat-to-hell red Strat, which was so beat that I decided to scrape the finish off with an old Dunlop capo – remember the ones that had the little teeth on them? I got B.B King, Buddy Guy, Albert Collins, Danny Gatton, and all of my heroes to sign it.”

Then there’s his 1931 National Triolian, scored in Indianapolis several years ago.

“The shop was a Dobro and National dealer,” he recounted. “They had a whole rack of them, and I saw this 70-year-old National guitar mixed in with all of the new ones. I think it was priced around $1,100, and the new ones started at around $2,300. I’d never heard of an original one going for less than the new ones, and I walked out with it for $975. The neck’s in perfect condition, and it sounds great. It’s on ‘Tamp ‘Em Up Solid’ on You & Me.”

The guitarist bought a Hoyer acoustic at a guitar show, partly because of its unique looks, but said, “It sounds so much like Django Reinhardt; really snappy. The pickguard is about a half-inch thick! It’s just interesting and cool, and is one of my favorite archtops.”

“I call the Guild a poor man’s Switchmaster,” he noted. “It sounds better than my ES-5. The ES-1403/4T is an interesting little guitar; I found it in Indiana in what I thought was a brown Les Paul case, but you can’t fit a Les Paul in there – believe me, I tried. I bought the 175 because of Steve Howe; I wanted to play ‘Starship Trooper’ properly! The DeArmond pickups on the Gretsch are very clear-sounding; they don’t rock like the Filter’Trons on the Brian Setzer-type guitars, but they have a very interesting sound, and it’s an awesome rhythm guitar.”

There are also a number of Gibson solidbodies in the Bonamassa stable, including a ’63 SG Junior, a ’65 white SG Special, a ’61 SG/Les Paul with a sideways vibrato, a ’58 Les Paul goldtop, and an early ’80s reissue Flying V. He has a dozen Historic Les Pauls, primarily for road work.

“I had an SG week a while back,” Bonamassa chuckled. “The Junior has a big baseball-bat neck on it, and it’s a killer guitar. I bought it in Kansas City, and two days later I bought a white SG Special. Like everybody else, I don’t use the vibrato on the SG/Les Paul, but tuned up, that guitar sounds really good.”

“It’s got its tags,” Bonamassa said of the ES-345, “And a patriotic sticker that somebody put on it during the Vietnam War… and it ain’t comin’ off. I like the red 335 better; I took the vibrato and Custom Made plaque off of it for a while and put a stud tailpiece on, but I returned it to stock (configuration).”

Joe’s collection of Fender solidbodies includes, interestingly, a mid-’60s Musicmaster and Mustang that are completely stock.

“I like those because they haven’t been stripped,” he said. “I hate to see guitars that have been looted or have all kinds of replacement parts on ’em.”

He also has upper-tier vintage Fenders, as well, including a ’61 “slab-board” Esquire he says sounds like a Les Paul Junior with a P-90. He also has a ’70 Telecaster, which is heard on the opening of “Tea For One” (“I used the Tele just for the opening, and a Les Paul for the rest of the song”). Stratocasters include a sunburst ’63 with clay-dot fret markers, and a sunburst ’64, which he says is “the loudest Strat I’ve ever owned; it’s a killer slide guitar.”

There are also oddball pieces in his collection, including a ’57 Fender double-neck steel, and an Airline.
“I’ve learned how to play (steel guitar) a little bit, but it’s really frustrating,” he noted. “Those Airlines were worth nothing up until Jack White from the White Stripes started playing one; it’s a cool guitar.” 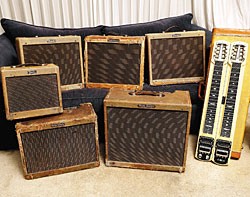 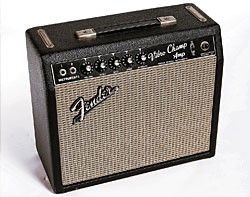 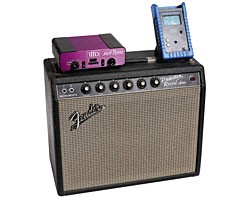 Of course, Bonamassa has some classic amplifiers, noting that he acquired what he deemed a “fetish” for narrow-panel Fender tweed amps. His lineup includes a 1960 Champ, ’59 Tremolux, ’57 Princeton, ’58 Princeton, ’59 Harvard, and a ’59 Vibrolux. The Tremolux is his favorite.

He describes his blackface Fender Vibro-Champ and Princeton Reverb amps as “…my Layla rig. Tom Dowd said (Eric) Clapton used those two models to do the Layla album – he [connected] one to the other, turned the volume all the way up, treble all the way up, and the bass all the way down; that’s the ‘Layla’ tone.”

Looking ahead, Bonamassa clarified rumors that his next album would be acoustic.

“We’ve started an album and we have tracks in the can,” he said. “But You & Me is still doing well on the Billboard blues chart; it debuted at number one, and it’s been a year. Even though I have five previous solo records, a lot of people were introduced to me through You & Me, so for the next album, we decided to take what we’ve accomplished with that album and do something better and more refined.”

Bonamassa may have just hit the “big 3-0,” but he has already had an admirable career as a guitar slinger, and he has a bright future. And while he doesn’t claim to be a role model, in the vintage guitar/guitar player game, his youth and accomplishments set a positive standard.

This article originally appeared in VG‘s August 2007 issue. All copyrights are by the author and Vintage Guitar magazine. Unauthorized replication or use is strictly prohibited.