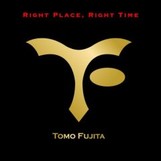 Fujita is a professor at Berklee College of Music, and the music here flies in the face of the old adage, “Those who can’t do, teach.”

Fujita proves himself a true player’s player; his mastery is obvious, his tone and sound are as good as it gets, and his soulfulness is unquestionable. The music is mostly a mix of funk and jazz that on occasion steps outside. Cuts like “Catty Woman” are a perfect example – a bluesy, funky, jazz piece, it takes a route not normally driven with a tone and feel that are liquid and warm. Tomo travels to James Brown-land with a funky 9th-chord fusillade that rolls into a jazzy shuffle on “Confidence Cat II.” The cut shows how easily (and skillfully) he can build a guitar solo. That funk shows up again on the chunky-and-funky “Funky Thang,” where he lays the foundation with “popcorn-guitar” single notes while the solo uses single lines, double-stops, and chords. “Orange Juice and Vodka” has a greasy groove with clean jazz-rock guitar gliding in and out of several key modulations before winding up with a J.B. sendup that sounds like James will be dancing out of your stereo any minute.


This article originally appeared in VG‘s Aug ’07 issue. All copyrights are by the author and Vintage Guitar magazine. Unauthorized replication or use is strictly prohibited.
The New Gear Yearbook